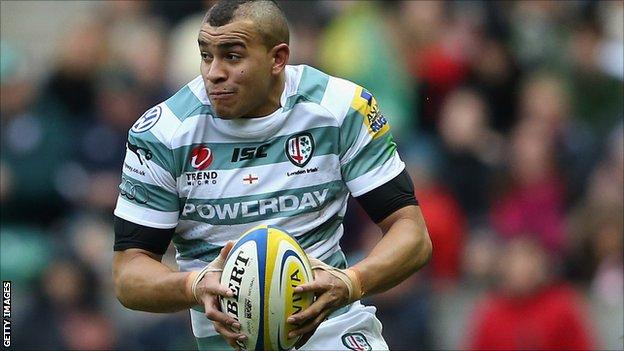 Jonathan Joseph, Alex Corbisiero, Matt Garvey and Jamie Gibson have all been linked with moves away from the club.

"We are fighting hard to try and keep the people and have made good offers," Martin told BBC Radio Berkshire.

"But there are always going to be clubs who pay more."

He continued: "There is no secret that there are four or five clubs now who are more financially robust or certainly richer in terms of their buying power then the rest of the clubs and we are not in that group."

Joseph, Corbisiero, Garvey and Gibson have been linked with Bath, Northampton, Harlequins and Leicester respectively but have all been offered new contracts by the Exiles.

However, Martin suggested that director of rugby Brian Smith was not fighting a fair battle in his attempts to keep them.

"He put offers in front of people early doors and made it clear that he wanted to keep them as part of this three-year project and the sort of money we were going to offer them," he said.

"Good robust offers have been made to all of them, but clearly there are a number of influences at the moment.

"It does not take a rocket scientist to see that there are a lot of influences on younger players from people who are no longer involved with the club.

"Coaches who have had a bid influences on the lives of some of these lads are now elsewhere. That said we have tried very hard to keep the players we want. We will keep some but not all of them.

"We all know the rules. And the rules say you cannot approach a player until January and we have suspicions about what might or might not have been going on. "

London Irish are currently second from bottom, five points ahead of Sale at the foot of the Premiership table.

However, they are prepared for relegation and, according to Martin, can cope with the financial impact it would have.

"Any business will prepare for ups and downs and it would be wrong if we hadn't prepared at the start of the year for all eventualities," he added,

"We have got financial models in place for whatever might happen. It's a horrible word (relegation) but it is something that is there and it is something we have to be mindful of.

"Financially we have got to be prepared if it did happen and we are."