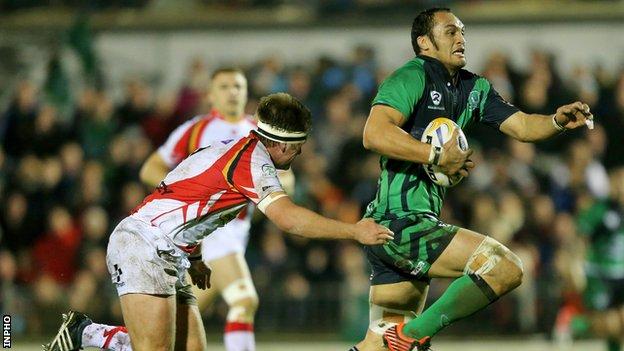 In-form George Naoupu is among four players to have signed contract extensions with Connacht.

Naoupu has signed a new two-year deal while Jason Harris-Wright, Mike Kearney and Eoin McKeon have agreed contract extensions of the same duration.

New Zealander Naoupu, 30, is in his second spell with the Irish province.

Naoupu's decision to remain in Galway is a boost for Connacht after the controversy which followed Mike McCarthy's move to Leinster.

The versatile Naoupu has scored tries against Zebre, Leinster and the Dragons this season.

"George is a strong and natural leader in our team," said Connacht coach Eric Elwood.

"He is a phenomenal ball carrier and shows an exceptionally high workrate game after game. He has a brilliant ability to switch from back row to lock seamlessly."

Hooker Harris-Wright, a former Ireland Under-20 international, moved to Connacht from Leinster on a one-year deal 18 months ago after appearing in the 2011 Heineken Cup final against Northampton.

Lock Kearney has made 22 appearances for Connacht and earned his first Heineken Cup start in the surprise win over Biarritz last month.

Galway-born McKeon, who played for Ireland at youth level, made his Celtic League debut three seasons ago and lined out in both European games against Biarritz this season.

"The retention of key players such as George, Jason, Mick and Eoin is another clear indication that we intend to retain our best players and continue to build for a successful future," said Connacht chief executive Tom Sears.

"The fact that all of the four have committed to Connacht in the face of strong interest from elsewhere is a demonstration of both the progress they have made as players and the progress we are making as a province."