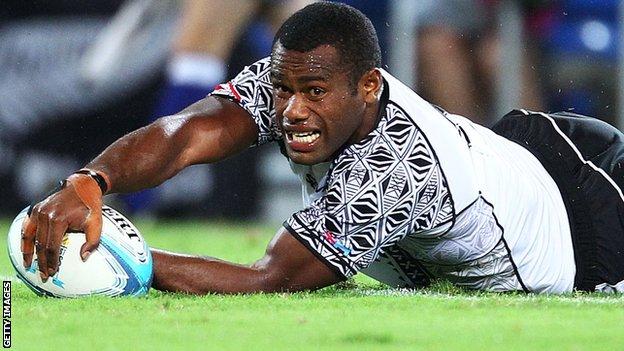 The 27-year-old after the club

He has been with Exeter since December after making his Fiji debut in June.

Votu will not be able to play until Exeter's LV=Cup match at Bath as he is not registered for the Heineken Cup.

"In some ways the delay will probably have done him some good because he's had a bit more time training with us," head coach Rob Baxter told BBC South West Sport.

"He's settled in a little bit more and got his base fitness where we wanted it to be in a nice relaxed environment where there's been no pressure of games."

Votu has played in Fiji's last seven games, but has yet to score a try for his country.

Baxter says the delay in Votu's deal has probably had a worse impact on the Fijian, rather than Exeter.

"We've had fit players so we've not been desperate for a winger to get out on the pitch," he added.

"But it has prevented him getting a bit more game time had we got him earlier in the season.

"It's a great opportunity for him to develop as a player and become a potential professional rugby player."