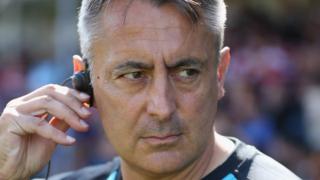 Gloucester director of rugby Nigel Davies tells BBC Points West he is delighted three of his players have received England call-ups as it means his side are "progressing".

Billy Twelvetrees, Freddie Burns and Ben Morgan have all been included in Stuart Lancaster's 33-man squad for the Six Nations, while Charlie Sharples, Jonny May and Shaun Knight have been named in the Saxons side.