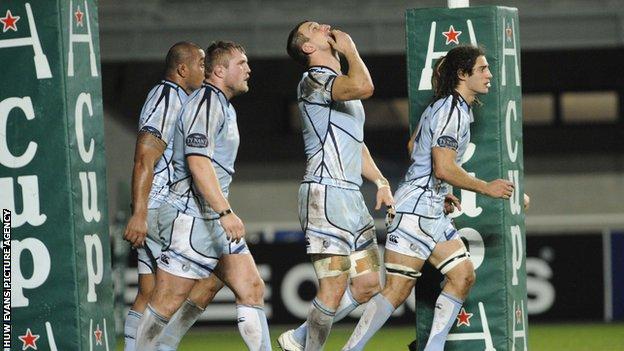 Phil Davies says trying to retain their place among Europe's top six seeds will be the objective for Cardiff Blues in their final two Heineken Cup games.

The Blues, cannot qualify for the quarter-finals after losing each pool game so far.

But that poor record also threatens to cost them their status as one of the top six ranked teams in Europe.

"We want to retain that and we are very proud of that," said Davies, the Blues director of rugby.

The top six seeds in the Heineken Cup avoid each other when the draw for the pool stages is made each season.

Fifth-ranked Blues are the only Welsh region in the top six, alongside Leinster, Toulouse, Biarritz, Munster and Northampton Saints.

Davies underlined the importance of finishing a disappointing Heineken Cup campaign on a high when they face Toulon on Saturday and Sale Sharks the following weekend.

"We want to try and retain it (top seed status) and that is why these games are important," said Davies.

"Every time we play, we have to perform and try and win and that is the extra incentive."

Established in 2007, the ERC European Rankings aim to reward clubs who consistently perform at the highest level in European competition over four seasons and separates the top six clubs in the pool stages.

Clubs earn between one to 11 points each season in the Heineken Cup and up to six points in the Amlin Challenge Cup to go towards their four season roll-over rankings.

The Blues are bottom of Pool 6 after four defeats and will pick up only one point if they fail to finish above Sale, who are currently three points ahead in the table.

"We always knew this year was going to be a tough year," added Davies, whose side was beaten 22-14 at home by Toulon in October.

"All the teams in Europe are improving year-in and year-out and sometimes when you are in the top tier you are going to meet top, top quality teams.

"These boys are playing Champions League rugby against some of the best players in the world in a stadium with 20,000 people going bananas."