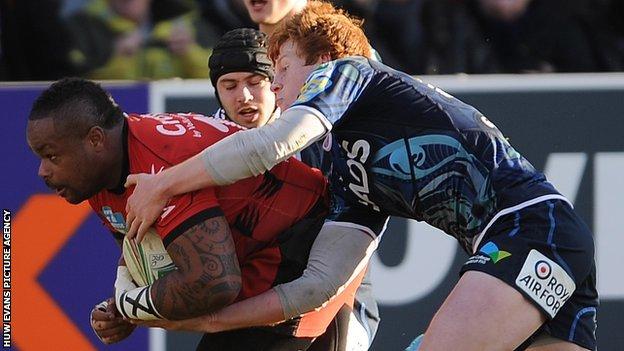 Toulon reached the Heineken Cup quarter-finals with a comfortable bonus-point win over a game Cardiff Blues at Stade Felix Mayol.

Halfpenny also scored the game's opening points with a penalty and try.

Toulon fly-half Jonny Wilkinson added four conversions and Matt Giteau another while Alex Cuthbert and Dafydd Hewitt also went over for the Blues.

The Blues' hopes of now rest on their clash against Sale Sharks at Cardiff Arms Park on Saturday, 19 January.

Established in 2007, the ERC European Rankings aim to reward clubs who consistently perform at the highest level in European competition over four seasons and separates the top six clubs in the pool stages.

Clubs earn between one to 11 points each season in the Heineken Cup and up to six points in the Amlin Challenge Cup to go towards their four season roll-over rankings.

The Blues are bottom of Pool 6 after five defeats and will pick up only one point if they fail to finish above Sale, who are currently two points ahead in the table.

On the same day Toulon travel to Montpellier in a game that will settle who tops Pool 6, although Toulon's 23-point tally already guarantees them a place in the last eight.

Halfpenny, making his first start after suffering a neck injury in Wales' autumn international against Australia, kicked the opening points.

The Wales full-back then finished off a fine move that began when Jamie Roberts sent centre partner Owen Williams through the middle of the home defence.

However, Toulon replied to the Blues' 17th-minute try after former New Zealand All Black Chris Masoe's charge paved the way for wing Wulf to cross.

Wilkinson converted and did so again after prop Chiocci ploughed over to put the hosts into the lead.

Hooker Orioli added a second for Toulon's front-row union after scrum-half Frederic Michalak switched the point of attack to the blindside.

Orioli's touchdown at the corner took Toulon to a 19-8 half-time lead.

Full-back Delon Armitage's speculative kick ahead earned Mermoz a try reward as he gathered the ball that Halfpenny failed to secure for the bonus point.

The rout continued as wing Palisson and centre Bastareaud went over.

And replacement prop Fresia was accredited with the next after Toulon's forwards drove over the visitors' line.

However, the Blues refused to accept their fate, typified by Halfpenny's 60-metre solo run that ended under the posts before he ended proceedings with the conversion.