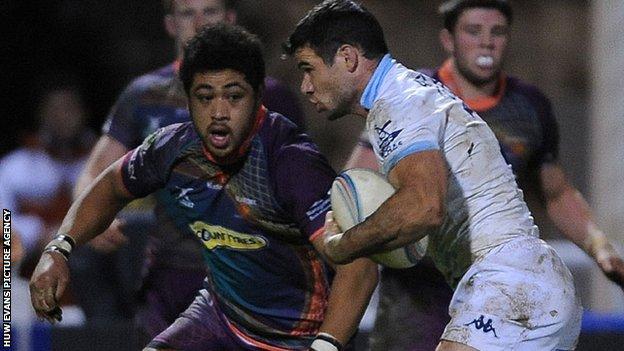 Phillips was speaking after his late try gave Bayonne a 25-22 win over Newport Gwent Dragons in the Amlin Cup.

The former Ospreys star believes the Welsh Rugby Union needs to provide an incentive for players to stay.

"It was a bit different for me, I played 10 years in Wales... but I think young players should stay," he said.

"I think maybe the WRU need to do something to make sure they do that. It's important for the future of Welsh rugby."

Phillips broke Dragons hearts with his 76th-minute try from a quickly-taken tapped penalty after coming on as a second-half replacement at Stade Jean Dauger.

One of the players lining up against him, Dragons and Wales number eight Toby Faletau, has been linked with a move to France, where a growing number of Welsh internationals now play.

Phillips, though, believes 22-year-old Faletau should not follow the recent exodus.

"When they get a bit older or maybe they're not playing much they can go elsewhere, but I think it's really important that we keep the talent," he said.

"There's an immense amount of talent now in Wales, we saw it with this Dragons side, and we need to keep it in Wales and develop it."

Phillips himself was delighted to score a try with Welsh television cameras in attendance and with the Wales Six Nations squad being named on 15 January.

"It was nice to score," said Phillips. "I know the game was on TV back home so it was nice to get over there, but I'm training hard on my own and hopefully I'll be part of the squad again.

"I'm just trying to focus on doing a bit of extra work and really just knuckling down to try and train hard and hopefully get into that squad."

Phillips was left out of the Wales team for the opening autumn international match against Argentina in November, but did play in the defeats by Samoa, New Zealand and Australia.