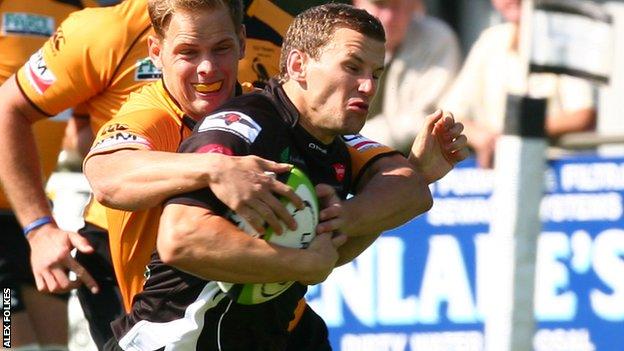 Launceston moved up to sixth place in National Two South after a convincing 32-10 win over Dings Crusaders.

Winger Richard Bright scored twice as the Cornish All Blacks secured their eighth four-try bonus of the season in difficult conditions at Polson Bridge.

"It would have been easy to stick it up our jumpers and make it a forward-orientated game with the conditions," captain Tom Rawlings told BBC Cornwall.

"But the backs, when they got clean ball, tore it apart," he added.

Tries from Ben Hilton and Bright, as well as a Kieron Lewitt penalty, put the home side 20-3 ahead before Dings centre Sam Cox was sent off.

Richard Friend went over seven minutes into the second half before Bright got his second on the hour as Launceston made the man advantage count.

"It was a great victory," Rawlings continued.

"To get two victories from two in the new year is an outstanding platform to build on.

"If we can keep up this form and consistency, we have to do it away at Shelford next week.

"We set a target of getting a win today and climbing the table and we've done that," he added.