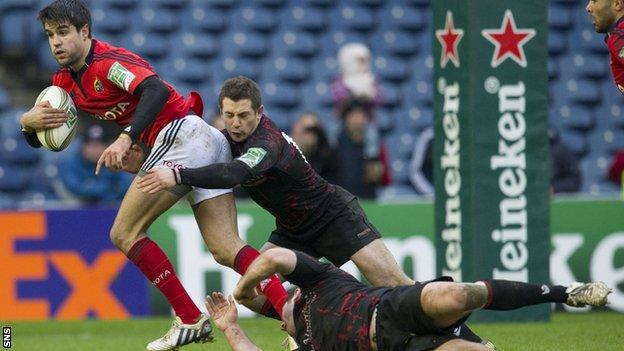 The hosts defended bravely but struggled to cope with the tremendous power in the Munster scrum, leaking points to the boot of Ronan O'Gara.

The visitors were awarded a second-half penalty try from a collapsed scrum and Conor Murray scrambled over soon after.

Dougie Fife twice touched down for Edinburgh late in the game to narrow the deficit in a bruising contest.

Edinburgh, without a point in five outings, will be kicking themselves that they didn't show such attacking enterprise earlier in the game, while the visitors will be annoyed at not turning their dominance into a bonus-point success.

Roared on by a huge travelling support, Munster opened up a nine-point lead thanks to the kicking of O'Gara, who landed three from four early penalties.

Edinburgh skipper Greig Laidlaw responded with a penalty from right in front of the posts but O'Gara was presented with another kicking opportunity from a scrummage infringement and duly popped the ball between the sticks.

The first half drew to a close with Edinburgh repelling wave after wave of attacks right on their try-line, with the whistle coming after a clumsy knock-on and players exchanging bad-tempered pushes.

Centre Ben Cairns raised home spirits with a weaving run into Munster territory and hopes of a fight-back were lifted when visiting prop David Kilcoyne was sin-binned for impeding Laidlaw from a quick tap-penalty.

But Edinburgh were architects of their own downfall as David Denton, under no pressure, was guilty of a forward pass deep in his own half.

Munster were able to keep the ball near the try-line and a chip from Murray into the scoring zone was batted away by Laidlaw as Keith Earls tussled with the Edinburgh fly-half.

Following a video review, referee Greg Garner flashed a yellow card at the home skipper for cynically knocking the ball out of play but did not award a penalty try.

The official soon made amends for that glaring oversight by giving a try to Munster as a five-metre scrum popped up, with Edinburgh buckling.

With Kilcoyne back on the field and the two-times European champions chasing four scores for a bonus, Murray then squeezed over.

On both occasions O'Gara added the extras.

Edinburgh's first try of a hugely disappointing European campaign came on 72 minutes and stemmed from a great slaloming surge from Matt Scott, with back-up from Ben Atiga.

The ball was then quickly worked out wide to Fife and the winger touched down.

Fife added a second score right under the posts following good work from Laidlaw, who caught the visitors on their heels with a deftly delayed offload.