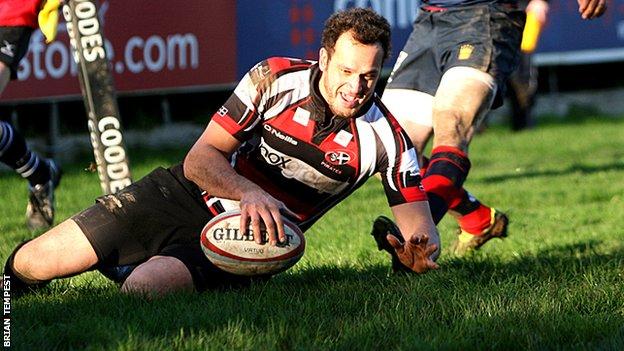 Cornish Pirates scored six tries as they secured a quarter-final place in the British and Irish Cup as they beat Dundee High 34-14.

"We said pre-match there were two things today - first was to qualify, and second was to entertain and we did both," said Pirates boss Ian Davies.

"With the number of changes that we made we still played some good rugby."

Pirates made nine changes for the clash, but the gulf between the full-time English Championship club and the part-time Scottish outfit was clear to see from the start as Hill went over after three minutes.

Jack Steele kicked two penalties to cut the deficit to a single point before Hallett got on the end of his own chip to score the second try and Burgess made it 19-6 at the break.

Four minutes after the restart Davies secured the bonus point for Pirates before Steele kicked his third penalty.

David Lyons got the home side's fifth try before Dundee replacement Gavin Robertson got a consolation score, but Davies rounded the win off with his second try just before the end.

"We didn't go out for the bonus point, " Davies told BBC Radio Cornwall.

"I said a three-nil would be enough, it was just about the win and getting through to the quarter-finals.

"I don't think we had a lot of intensity to what we were doing and we scored when we wanted to.

"I think if it had been a Nottingham or a Bristol there would have been a lot more intensity from us, but we've still got to score the points."