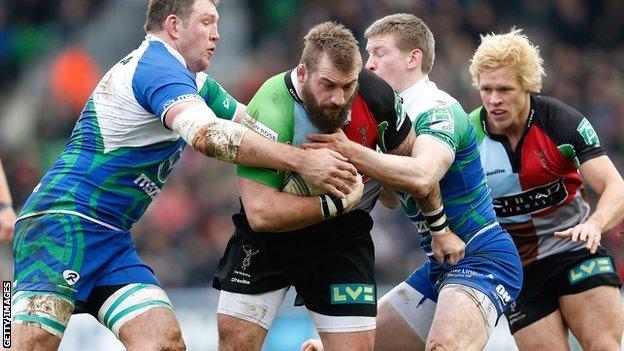 Harlequins romped into the Heineken Cup quarter-finals with a bonus-point win over Connacht in Pool Three.

A penalty try and 11 points from the boot of Nick Evans gave Quins a 16-3 lead at the break.

Wing Tom Williams scored either side of Connacht having two men sin-binned.

Premiership leaders Quins took time to impose themselves on an admirably committed Connacht side but in the end the power of their pack, in which England discard Nick Easter was again outstanding, and the class of their backs ensured they ran out easy winners.

From the first engagement Quins were on top at the scrum and they took the lead when England scrum-half Danny Care sniped from the base, Connacht blind-side Andrew Browne failed to release in the tackle and Evans landed the penalty from wide on the right.

Connacht may be the poor relation of the four Irish provinces but they are improving year on year, adding increasing skill and adventure to their undoubted grit, and they were soon level after James Johnston was penalised for going off his feet at a ruck and Matthew Jarvis slotted the penalty.

But Jarvis was immediately charged down and although Connacht regained possession they were penalised at the ruck and Evans kicked Quins into a lead they were never to relinquish.

Both sides were playing with plenty of width and pace and although Evans then missed a kickable penalty for the hosts, they finally started to pull clear in the closing stages of the first half.

Connacht just managed to keep out a rolling maul but the power of the Quins pack told as they twice smashed the visitors at the scrum, and on the second occasion referee Neil Paterson had no hesitation in awarding a penalty try as the Irish scrum atomised in front of a massive Quins drive.

Evans landed the conversion and popped over a third penalty to make it 16-3 at the break, and Quins were on their way.

England back-three man Mike Brown split the Connacht defence with an arcing run inside the first two minutes of the second half and winger Williams finished in the corner, despite a fine covering tackle from O'Halloran.

Evans converted and any hope the visitors had disappeared as O'Connor and Fetu'u Vainikolo were yellow carded in quick succession.

The influential Brown soon sent Williams cruising over for his second, although this time Evans could not convert.

The visitors then went close through Browne from a well-worked short line-out and were finally rewarded just after the hour mark as O'Connor - back on after his time in the bin - crossed from another line-out for an unconverted try.

But Quins were soon back on track and Monye marked his 200th game for Quins with a fine unconverted solo score to bring up the bonus point.

Replacement centre Lowe added a fifth from Evans's precise grubber kick and Ben Botica converted before scoring for Quins with the last play of the match.

Evans popped over the conversion as the English champions put themselves in a good position to play their quarter-final back at the Twickenham Stoop.

Quins can secure a home last-eight tie when they travel to Biarritz on Friday. The French side maintained their slim hopes of taking one of the two best runners-up spots with a 32-6 win away at Zebre.

"We will enjoy tonight and have the opportunity of looking forward to that quarter-final at the Stoop on a hard pitch in April.

"Connacht came to play rugby; it was tough for long periods especially as we played into a stiff breeze in the first half. The penalty try just before half-time gave us breathing space.

"We were far more direct in the second half and played some superb rugby."