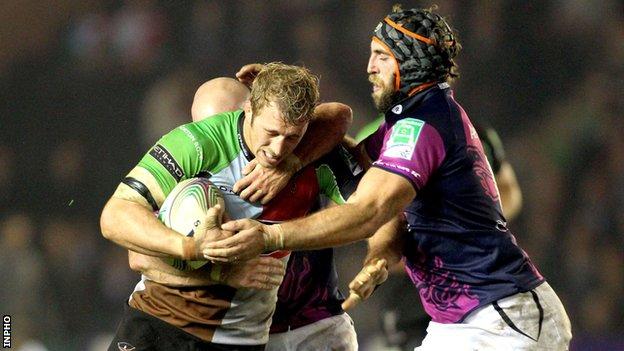 Harlequins will seal a place in the Heineken Cup quarter-finals by beating Connacht at the Stoop on Saturday.

Even a losing bonus point will be enough for Saracens to win Pool 3 ahead of next weekend's last round of games.

Ugo Monye returns at left wing in one of seven changes from last weekend's win over London Welsh.

Mike Brown, Matt Hopper and Tom Casson return to the backs with the forward changes including the return of Maurie Fa'asavalu and Olly Kohn.

Fa'asavalu will partner Nick Easter and England captain Chris Robshaw in the back row.

Monye will be making his 200 appearance for the Quins as they attempt to become the first club to qualify for the knockout stages of this season's European competition.

Connacht will be without injured Dan Parks and George Naoupu for the round five game.

Miah Nikora, who returned to training last week following injury, is named on the bench along with replacement winger James Loxton, who could earn his first Heineken Cup appearance on Saturday afternoon.

Connacht are already out of contention for a place in the quarter-finals but their pre-Christmas games included a memorable home win over Biarritz in the competition.

Coach Eric Elwood says Saturday's game represents a "massive opportunity" for his side.

"We're going to play a hugely strong team who are English champions and top of the league at the moment," added Elwood.

"They've blitzed everybody in our pool so far. But the good news for us is that we're going there with confidence after the win against Dragons last week."

Elwood also takes a certain amount of confidence from the way his team competed well against Quins in Galway in October before the English club ran out eight-point winners.

"We had a great game against Quins here in October where we both tried to play ball and we're going to have the same mind-set this week."