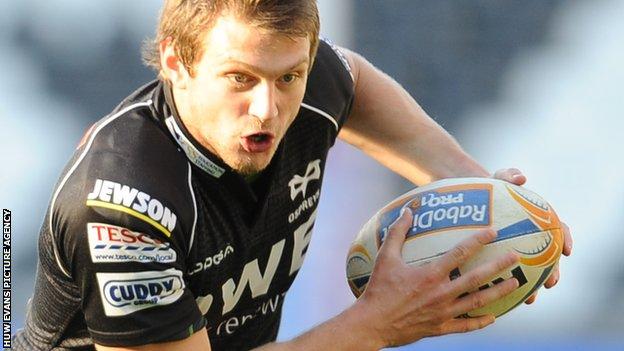 Dan Biggar is on the brink of signing a new three-year deal to commit his future to Ospreys.

The Wales and Ospreys fly-half has been linked with a lucrative move to French club Racing Metro in Paris.

But the 23-year-old has confirmed he will extend his contract with the Ospreys in the next few weeks.

"We are in advanced talks and I am hoping to get something sorted over the next couple of weeks," Biggar told BBC Wales Sport. "I am very happy here."

Biggar is the latest Welsh international to commit his future to Welsh rugby and buck the trend of players moving to France and England.

He follows Wales wing Alex Cuthbert, who recently signed a three-year-deal to stay with Cardiff Blues after also being linked with a move to France.

Two other high profile players are moving at the end of the season, though.

Jamie Roberts, the Wales and Lions centre, has revealed he will leave the Blues and Wales flanker Dan Lydiate has decided not to renew his contract at Newport Gwent Dragons. Both are expected to sign for a French club.

But Biggar said: "The three things I am asking myself are: Am I happy, am I going financially looked after and are we a competitive side?

"All three of those things have matched, so as long as we can get something signed in the next few weeks, I will be very happy."

Biggar, capped 11 times by Wales, has revealed he had no concrete offers on the table from big-spending French club Racing Metro or any other clubs in France.

"I have had nothing on the table and I am happy here and this is where I want to continue to play as long as we keep hold of players like Khan [Fotuali'i] and a strong forward pack, I'm happy to stay," he added.

Biggar revealed his intention to stay a few days before Ospreys' "must win" Heineken Cup clash against Leicester Tigers on Sunday at the Liberty Stadium.

The Welsh region must beat the Tigers, the former Heineken Cup double winners, to keep their chances of a quarter-final place alive.

"These are the games you want to be involved in," said Biggar.

"It's winner takes all. Leicester win and they knock us out and put themselves in a strong position.

"We win and we really pull ourselves up and take it to the last weekend of the Pool. It's exciting times."