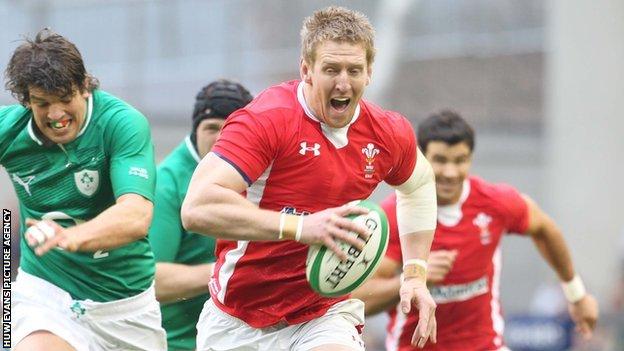 Davies, 26, has suffered an ankle ligament injury in training with Cardiff Blues and requires surgery.

"Bradley will have an operation early next week and an accurate timescale on his recovery will be assessed after the operation," said a Blues statement.

Charteris is out for the rest of the season, but Jones could return mid-way through the Six Nations.

Wales are also hopeful that Ian Evans will be fit following a knee injury to feature in the championship opener against Ireland in Cardiff on 2 February.

Davies spent most of Wales' 2012 Grand Slam campaign on the sidelines after being in their opening win against Ireland in Dublin.

After being felled by New Zealand hooker Andrew Hore on 24 November in Cardiff, 6ft 6in, 19st 2lb Davies was ruled out of Wales' 14-12 defeat by Australia a week later.

Ospreys lock Jones had already been ruled out following the injury he suffered in Wales' opening autumn loss to Argentina.

Evans has yet to reappear for the Ospreys, who announced on 6 December that he faced a six-to-eight-week lay-off.

Ryan Jones and Reed are now contenders to continue their partnership against Ireland, who are themselves

Shingler has played across the Scarlets' back-row and in the second-row. Another Scarlet, Josh Turnbull, could also fit both roles.

Wales will be but Scarlets hooker Ken Owens has returned to their starting line-up following a rib injury.

Wales were recently boosted by news that George North's neck injury was not as bad as first feared.

from the ruptured bicep he suffered against London Welsh in September has also improved Wales' front-row resources.

During their autumn 2012 campaign, Wales ended up without four tight-heads in Adam Jones, Mitchell, Aaron Jarvis and Rhodri Jones.

Jarvis had stepped in to cover for Jones and Mitchell, only to suffer a knee injury that has ruled him out of the Six Nations.

Centre Jamie Roberts returned from injury for Cardiff Blues in their 17-6 victory at Munster in the Pro12 on Saturday, while Leigh Halfpenny recovered from a neck injury to take a place on the bench for the Blues.

However, the defending Six Nations champions still have other injury worries ahead of the annual tournament.

Fly-half Rhys Priestland is out of the 2013 campaign because of a torn Achilles tendon and is a doubt for the British and Irish Lions tour this summer.