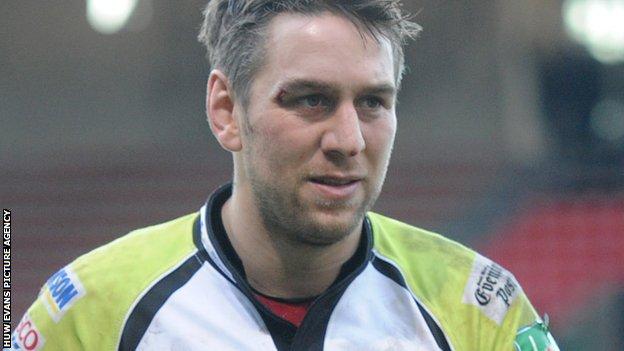 Ospreys trio Ryan Jones, Ian Evans and Richard Hibbard are expected to be fit for Wales' 2013 Six Nations opener against Ireland on 2 February.

Jones (thumb) and Hibbard (shoulder) went off in Ospreys' 15-15 draw with Leicester, while Evans (knee) has been out since November's loss to Samoa.

Jones had an operation on a dislocated thumb on Sunday and is upbeat about making the Ireland game.

"I hope to be in contention for Ireland," he told BBC Radio Wales.

"I'm looking anything up to four weeks but these surgeons tend to be a bit conservative."

The flanker - who published a photograph of his patched thumb on his Twitter account - suffered a compound dislocation of the joint during Sunday's game at the Liberty Stadium.

He was expected to be ruled out for three to four weeks but Humphreys said: "If it's a pain management [matter], which it probably will be, he is a real tough kid so I'm sure he will be fine."

Hibbard left the field clutching his shoulder against the Tigers but again Humphreys is confident the hooker will be fit.

"He will train fully with Wales and if we pushed him he could play this week [against Treviso] but for his own safety we have decided to take that decision out of his hands," said Humphreys.

"He will definitely be fit [for Ireland]."

Hibbard has only recently returned from a shoulder injury that prevented him from playing in Wales' final autumn Tests against New Zealand and Australia.

After the Leicester match Ospreys coach Steve Tandy suggested the hooker had only aggravated the problem rather than suffering any serious damage.

Humphreys also said Evans was likely to be fit for Ireland.

There were other injuries last weekend to Scarlets centre Scott Williams and Blues lock Bradley Davies.

Williams was forced off early as Scarlets lost 33-14 in Leinster.

Davies will be out for several weeks with an ankle ligament injury. He was due to have surgery on Monday.

Charteris is out for the rest of the season, while Alun Wyn Jones could return midway through the championship.

There was some encouragement for Wales interim coach Rob Howley as hooker Ken Owens returned to action for Scarlets, only for centre Williams to hobble off in Leinster.

Scarlets coach Simon Easterby was unable to give any indication about the severity of the injury, which will be assessed on Monday, but said George North was "on the mend" after being carried off with a neck injury against Ulster.

"Hopefully he'll be back into training this week," said Easterby.