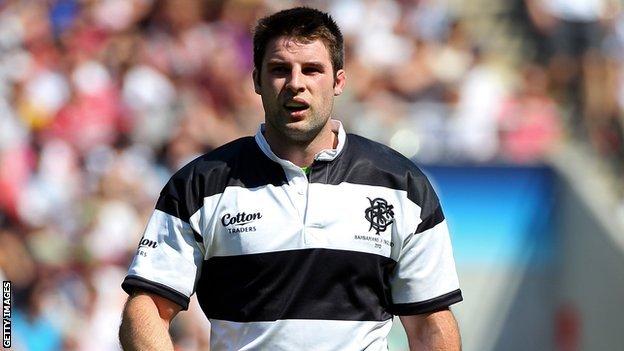 The 27-year-old moved to France last summer seeking a route back into the Scotland team after falling out of favour at Glasgow Warriors.

Johnson, the interim head coach, has included 10 uncapped players in the squad that will gather in Glasgow.

The squad comprises 19 Warriors, seven from Edinburgh and nine "exiles".

Beattie dropped down the pecking order at Glasgow under Sean Lineen and left for France's Top 14 league after eight years with his hometown club. He scored a try for Montpellier against Sale in the Heineken Cup at the weekend.

Where two players have been vying for the one spot in areas such as the back-row, we've gone with the form option

His try-scoring debut for Scotland against Romania in 2006 was followed by 15 further caps but he struggled with his fitness and form after sustaining a shoulder injury following an impressive Six Nations campaign in 2010.

He was absent from the 2011 World Cup and from last season's summer tour to Australia, Fiji and Samoa.

Richie Vernon, Alasdair Dickinson, Moray Low, Robert Harley and Duncan Weir are also recalled to the squad for the three-day get-together after being omitted from the autumn Tests.

For Glasgow number nine Kennedy, New Zealand-born winger Maitland, 25-year-old MacArthur, and 23-year-olds Wilson and Fusaro, it is their first involvement with the full Scotland squad.

"Selection is based on form and future - that was our two criteria," Johnson told BBC Scotland.

"I think the squad replicates that and supports what we're trying to do.

"I think Glasgow's form's been great in the Rabo. I think they've competed really, really well, so it's a reward for good form and I think there's not too many players in that squad that people can argue with.

Edinburgh centre Nick De Luca is out for about two months, following an operation to a fractured eye socket and Al Strokosch misses out with his wife expected to give birth.

Scotland kick off their Six Nations campaign against England at Twickenham on 2 February looking to do much better than last year when, under Andy Robinson, they ended up with the wooden spoon.

The following week Scotland host Italy at Murrayfield, then Ireland and Wales visit Edinburgh, on 24 February and 9 March respectively.

Scotland's final Six Nations match is away to France on Saturday 16 March.