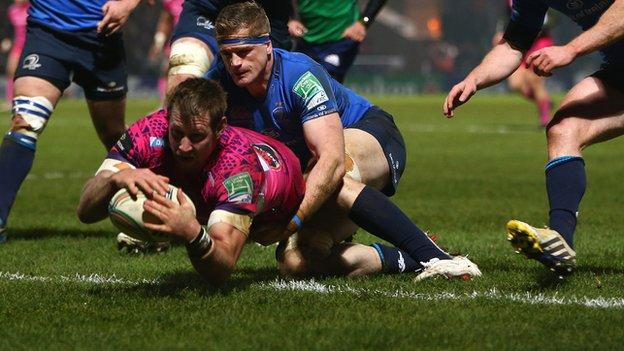 Defending champions Leinster face a nervous wait after coming from behind to beat Exeter and secure second place in Heineken Cup Pool Five.

Converted tries through Neil Clark and a penalty try helped Exeter lead 17-12 at half-time, the visitors scoring through Gordon D'Arcy and Rob Kearney.

But Leinster went in front through Brian O'Driscoll's score.

And Jamie Heaslip's try earned a bonus point to leave them in the second of the two qualifying runners-up spots.

The last eight is made up of the six pool winners, plus the two best-placed runners-up, and the bonus point means Leinster have 20 points.

That gives them a chance of continuing their title defence, but Munster play on Sunday and if they score four tries and beat Racing Metro (assuming leaders Saracens defeat winless Edinburgh to top the group), they can still pip their Irish provincial rivals to the second runners-up place.

Clermont Auvergne had already won the pool and they outclassed Scarlets 29-0 to ensure a home quarter-final.

The Leinster v Exeter encounter was a hugely entertaining game at a chilly Sandy Park, with the champions' desire for a bonus point meaning they chucked the ball around from the first whistle.

You have got to earn the right to go wide though, and it was the power of the pack, and particularly ball carriers like Sean O'Brien, Cian Healy and Heaslip, that got them on the front foot as they attacked at pace and went in front inside the opening five minutes.

Jonathan Sexton's brave penalty into the corner set up the position and the forwards hammered away before quick recycling gave D'Arcy the chance to step inside his man and score.

Exeter saw England flanker Tom Johnson taken off on a stretcher with a knee injury after 14 minutes, with Ben White entering the fray, but they were soon on the scoreboard as well.

Like the visitors the Chiefs spurned the chance to kick at goal and from the resulting line-out they were handsomely rewarded as Clark barrelled over.

Leinster went back in front as the forwards battered away again and delightful handling from O'Driscoll and Sexton sent Kearney over in the corner.

Suddenly Leinster, despite attacking in waves from all over the pitch, were looking at the end of their European campaign.

But the Dublin-based side have not won three Heineken Cups out of the last four by fluke and they hit back with two quick tries.

Former Ireland captain O'Driscoll finished off a fantastic multi-phase try in which he, Luke Fitzgerald and Leo Cullen all featured twice.

And with just under half an hour to play O'Driscoll's successor as Ireland captain, Heaslip, powered over from the base of a five-metre scrum.

Sexton added both conversions and although Steenson cut the gap to six points with a penalty with just over 10 minutes to go, Sexton restored the nine-point margin once again.

Leinster ended on the attack but could not add to their score and they now face an agonising time watching as Munster try to win with a bonus point at home to Parisian side Racing Metro.

View from the dressing rooms

"We are where we are. There certainly won't be any celebrating from us because we know that Munster have a real target - that is one of the advantages of playing on the Sunday.

"We knew how tough it was going to be to come here and get the five points, which was the minimum we required.

"I thought we were really good for it, and the quality of our tries was first rate, but I have a lot of respect for Exeter as well."

"I think we played with a lot of intensity and that was our aim going into this match. We were aware that at Clermont (last weekend) we didn't match their intensity at times.

"That has been a big focus of what we wanted to do this week and I think we did that very well, but at the same time you have to keep it going and get a lot of little bits right.

"The odd bit of scrum pressure, the defensive lapses and all of a sudden you are under your own posts and another try has gone in. That is what the Heineken Cup has taught us."