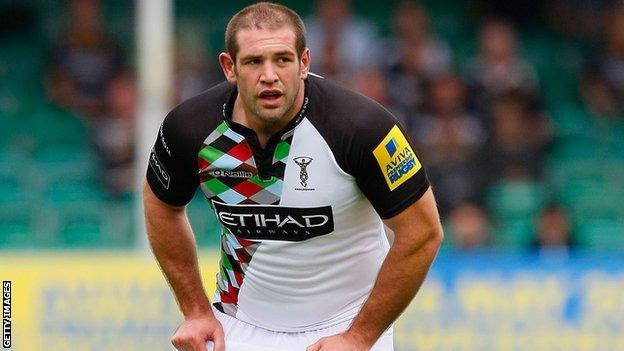 Bristol-born Kohn, 6ft 7in and 21st 10lb, says his late grandfather was from the Rhymney Valley and that he "would love" to play for Wales.

Only Perpignan's Charteris has been formally ruled out of the entire Six Nations.

Versatile Ryan Jones (thumb), and fellow Osprey Evans (knee) could be fit before or shortly after the tournament kicks off.

Cardiff Blue Davies (ankle) was due to undergo surgery on Monday.

Interim Wales coach Robert Howley will announce on Tuesday at 11:00 GMT his Six Nations squad, which could accommodate players he is confident will be fit to return at some stage during the tournament.

Kohn helped Quins win the 2011-12 Aviva Premiership and reach this season's Heineken Cup quarter-finals with a on Saturday.

His reward was a fresh announced on Monday.

"My grandfather - he's passed away now - he was... a massive Welsh rugby fan," said Kohn, who has played 133 Quins games since joining from Bristol in 2006.

"I remember sitting in the house and there was my dad cheering for England and him [my grandfather] going nuts for Wales; a big split when it came to that day on the Six Nations - or when it was the Five Nations back then.

"So that's my [Welsh] connection.

"I've enjoyed my time at Harlequins. I've been there for seven years now and I'm enjoying my rugby playing well in a good team and I'd be honoured to play for Wales.

"I'm playing week-in, week-out in a top Premiership team who play a good style of rugby all across the park and we've just qualified for the quarter-finals of the Heineken Cup.

"So I'm pleased about my form and where my rugby's at and obviously I'm a big guy… and I think I've definitely got something to offer."

Kohn is unsure if Wales have previously been unaware of his qualification.

He added: "I don't know if they're aware of my Welsh connection because with my name Kohn, a lot of people can mistake it and either think I'm German or South African.

"But in fact the name's Czech because it was from my other half of the family from Czechoslovakia.

"If Wales are playing I'll always watch them and support them as well."