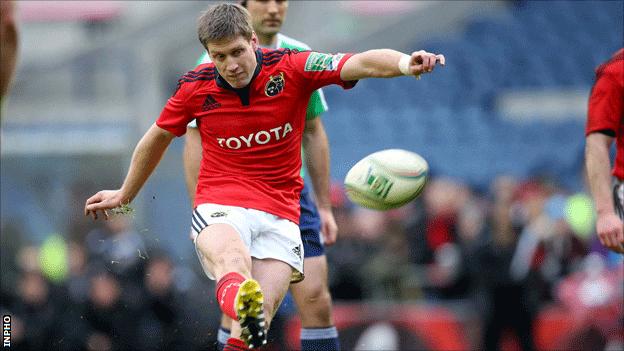 Ronan O'Gara will miss Munster's crucial Heineken Cup match against Racing Metro on Sunday after being handed a one-week suspension.

O'Gara was facing a possible four-week ban but a European Rugby Cup (ERC) hearing on Thursday ruled a one-week suspension was an appropriate sanction.

He will be available for Ireland's opening Six Nations game against Wales.

O'Gara admitted the charge when he appeared at Thursday's disciplinary hearing in Dublin in front of independent judicial officer Judge Jeff Blackett.

"The judicial officer upheld the complaint and found that O'Gara had committed a petulant act which was out of character," an ERC statement said.

"He determined that the act was in the lower end (four weeks) of the IRB's sanctioning regime, and taking into account the player's guilty plea and his good disciplinary record, the judicial officer reduced the suspension by 50%.

"Judge Blackett then determined that a two-week suspension would be wholly disproportionate to the level of offending as O'Gara had been body-checked by Sean Cox prior to the incident.

"He also accepted that O'Gara had intended to trip, rather than to kick Cox."

O'Gara kicked four penalties and two conversions as his side kept their hopes of a Heineken Cup quarter-final place alive with a 17-26 win.

Munster face the French outfit at Thomond Park and Rob Penney's side will probably require a bonus-point win to progress to the last eight.