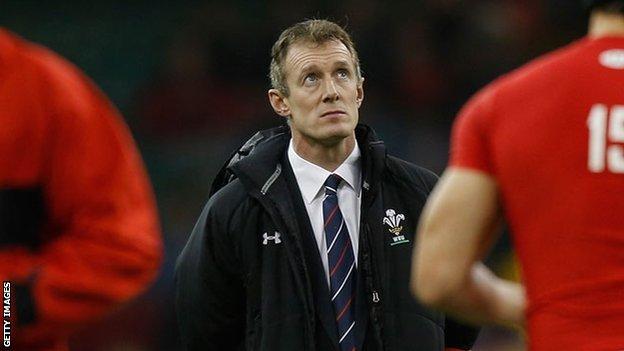 Interim Wales coach Robert Howley will reveal on Tuesday his plans for dealing with his team's lock injury crisis heading into the 2013 Six Nations.

Howley will name his squad with Luke Charteris (knee) ruled out and a major doubt over Bradley Davies (ankle).

There are also fears that Alun Wyn Jones (shoulder), Ian Evans (knee) and Ryan Jones (thumb) will not be fit for the 2 February opener against Ireland.

Wales were ravaged by injuries in their four-Test autumn whitewash, and finished the final defeat by Australia with versatile Ospreys back-five forward Ryan Jones alongside Cardiff Blue Lou Reed in the second-row.

But Jones has been ruled out for between three and four weeks after he dislocated a thumb in the Ospreys' 15-15 Heineken Cup draw with Leicester on Sunday.

In the same game, hooker Hibbard went off because of shoulder damage, while Williams left early as Scarlets lost 33-14 in Leinster on Saturday.

The injuries compounded a miserable weekend for Howley, which started with news that Bradley Davies will be out for several weeks with an ankle ligament injury.

Davies was due to have surgery on Monday.

In the meantime, BBC Sport Wales have revealed that Bristol-born Harlequins lock Olly Kohn has announced he wants to play for Wales.

Howley is due to announce his squad for the Six Nations tournament on Tuesday at 11:00 GMT.

Charteris is out for the rest of the season, Wyn Jones could return midway through the championship and Evans hopes to be fit to face Ireland in the opener in Cardiff on 2 February.

Ryan Jones, primarily a back-row forward, would be an option to fill in at lock, but the injury puts the 31-year-old's early tournament place in doubt.

Hibbard has only recently returned from a shoulder injury that prevented him from playing in Wales' final autumn Tests against New Zealand and Australia.

There was some encouragement for Howley as hooker Ken Owens returned to action for Scarlets, only for centre Williams to hobble off in Leinster.

Among the uncapped young players impressing in Wales this season have been Ospreys wing Eli Walker, his lock team-mate James King, Cardiff Blues fly-half Rhys Patchell and their second-row forward James Down.

Patchell, 19, could come in as Wales ponder their fly-half options in the injury-absence of Rhys Priestland (Achilles).