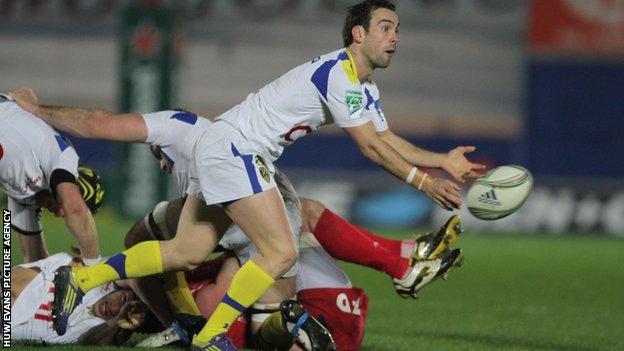 Clermont Auvergne underlined their Heineken Cup credentials by outclassing winless Scarlets in a bonus-point win to ensure a home quarter-final.

ran in four tries to ensure being ranked second to Harlequins ahead of Sunday's pool games that settle the last eight.

Defeat ended the Welsh side's interest in this season's competition, but they they went into their final Pool 5 encounter without hope of progress to the knock-out stages.

Even so, they had hoped to avoid only a second whitewash in their European history only to end the match without registering a score.

Lee Byrne celebrated his return to the Wales squad by helping the French Top 14 side win at one of his former teams.

But while Byrne did not appear on the scoreboard, he ably undertook his defensive duties while erstwhile Wales colleague and rival was marked by a half-time ceremony.

By that stage the visitors had already completed most of their night's work.

Nalaga broke free following hooker Benjamin Kayser's powerful run and the gulf in class was underlined when Parra followed him to the line.

When Stanley cut through the home defence the omen's were not healthy for the hosts, who have now suffered seven defeats in their last eight games in all competitions.

And a day after former Ospreys boss they failed to muster a response despite a vastly-improved second-half display.

Once-capped New Zealand All Black King reminded the home faithful of what they had been missing as he prised open the defence with some clever footwork before sending Rougerie over.

"We conceded 24 points in the first half and they did not have to work for a huge amount of those points.

"Any team where you conceded 24 points is going to be difficult, but a team like Clermont you dig a real big hole for yourself.

"It's frustrating. We just fed them too much in the first half. I think it was 70 per cent possession against and 70% territory.

"We just need to be far more accurate. They scored off an intercept and fed off our mistakes.

"It was a game that was built on the first 20 minutes. I thought we were pretty serious the way we went about our work. They (Scarlets) are a team you have to get a hold of early.

"They are a great team. They can play good footie, as they showed in the second half.

"The second half was more of us defending and I was delighted we didn't concede a try.

"We are happy for our supporters because it is the first time we have booked a home quarter-final."

Not Used: A Davies.