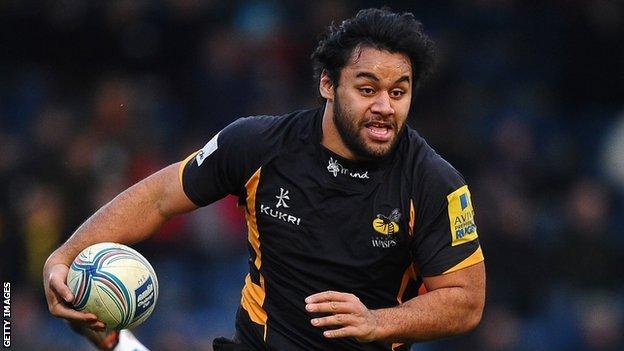 Wasps director of rugby Dai Young has revealed he only found out about the departure of Billy Vunipola to Saracens hours before the move was confirmed.

The 20-year-old number eight on a "long-term" deal and link up with brother Mako.

"During our contract talks, the player had been adamant that he did not want to leave the club," said Young.

Billy is the son of Fe'ao, who won 32 caps for Tonga. Six of his uncles and his grandfather also represented the South Pacific nation.

And Tonga-born cousin Toby Faletau, a back-row with Newport Gwent Dragons, has 21 caps for Wales.

"But we know he was under pressure for family reasons to go and join his brother at Saracens."

Vunipola, a product of the Wasps academy, has made 30 appearances for the High Wycombe-based club since his debut in January 2011.

He has been placed in the Rugby Football Union's development programme, and is currently in the Saxons set-up, with the prospect of being a future England international.

And Young has expressed his sadness that the Australia-born forward had not opted to commit to Wasps.

"We are clearly hugely disappointed," he said. "Billy is a player that the club identified some time ago as one with huge potential and he's been developed by London Wasps, despite a period when he struggled with illness and injury, into one of the brightest young talents in English rugby.

"We did everything in our power to keep Billy. We offered him the contract he asked for. He is playing regularly and he has already got international recognition, so we didn't see any reason for him to leave.

"Although we heard the whispers about him going to Saracens, we were only officially informed on [Monday] afternoon that Billy was leaving and had previously signed for them.

"Although we are bitterly disappointed right now, it is only fair for me to say that I believe that Billy will become a top quality international player for years to come and we wish him the best with his career.

"There is a long way to go in the season and I am sure he will give his all for Wasps in the coming months."