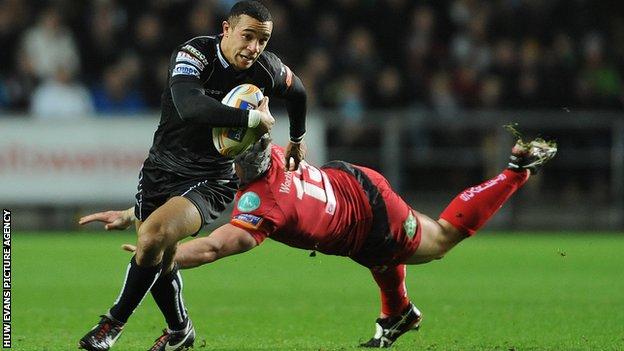 "The number of line breaks and tries he's scored, and ability to beat players is exceptional," said Howley.

"To have Eli in putting pressure on George North and Alex Cuthbert - that's a key ingredient for us in terms of competition for places."

Walker is in his first full season with Ospreys, having made his first start for the region at the end of last season.

The Wales Under-20 international has scored five tries in 13 appearances, catching the eye in particular with a superb solo effort in a Heineken Cup win over Toulouse in December.

There was further evidence on his potential on Sunday when his weaving run set up a late try as Ospreys clawed their way back to draw with Leicester.

And with Howley revealing that Wales want to move North to the centre at some stage, Walker could soon be given his chance in the Six Nations.

"We talked about him in the autumn selection but we just felt he needed to play a couple of more games in the Heineken Cup under the pressure of that higher level and intensity.

"He's played particularly well over the Christmas period. He's very elusive, he certainly turns up in the place at the right time."

Walker was one of five uncapped players named by Howley in the squad to defend the Six Nations crown Wales won with a 2012 Grand Slam.

Too soon for Rhys Patchell

We get very enthused sometimes about number 10 performances. I think he needs to play week-in-week-out for the region and there's benefit for him to play for the Under-20s

While the winger's selection has been earned purely on form, necessity has play a greater role with the other four.

Injuries to four front-line locks have given James King and Andrew Coombs their first national call ups, while Josh Navidi and Andries Pretorius have benefited from injuries to Dan Lydiate and Ryan Jones.

Of the four, Howley suggested Cardiff Blues number eight Pretorius, a South African who recently qualified for Wales on residency grounds, was the most likely to force himself into the side.

"He's got leadership qualities. He's very dynamic and he's an option as an eight to put a bit of pressure on Toby Faletau," said Howley, who expects locks Alun Wyn Jones and Ian Evans to recover from injury to play at some stage during the six-week tournament.

"We need to create a competitive environment. Over the last 12 months maybe that competition hasn't been there."

A notable inclusion was 32-year-old Lee Byrne, selected in the squad for the first time since the 2011 World Cup.

Byrne broke a bone in his back in December but is expected to return to face Scarlets for Clermont Auvergne in the Heineken Cup on Saturday.

"It wasn't a decision we took lightly, I can assure you of that," said Howley.

"We want to look at George North in the centre, possibly. It gives us an added option there.

"Lee Byrne is playing excellent rugby and I think his experience as a British Lion. I've been impressed when he played for Clermont before the Christmas period."