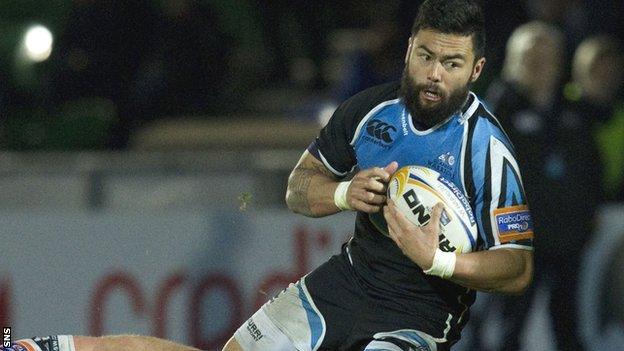 Centre Troy Nathan will depart Glasgow Warriors on Saturday having struggled to establish himself in head coach Gregor Townsend's plans this season.

The New Zealander was signed by Sean Lineen in May 2011 and will leave the club after the Heineken Cup home match against Northampton Saints.

"I'm sorry to be leaving before the end of the season," said Nathan.

"I've enjoyed my time in Glasgow and I wish the Warriors squad all the best with the current campaign and beyond."

And the 29-year-old, who made 17 Rabo Pro12 and four Heineken Cup appearances for Glasgow, added: "I haven't found another club yet, but I've never been fitter and I'm optimistic about the future."

Nathan came through the youth development set-up at Waikato Chiefs in his homeland before joining Counties Manukau.

He moved to Connacht in 2007 and made 73 appearances for the Irish province, scoring five tries, before moving to Scotland.

Peter Murchie, Graeme Morrison and Byron McGuigan are Nathan's rivals for the centre position, while Sean Lamont and DTH van der Merwe can move in from the wing to cover the role too.

Townsend said: "Given the strength and depth that we now have in our midfield, Troy's opportunities this season have been limited.

"With that in mind, both parties have agreed that it would be in Troy's best interests to move on so that he can focus on securing his future at another club.

"We thank Troy for his contribution to Glasgow Warriors and wish him continued success in his future career."

Meanwhile, German Araoz completes his contract with the Warriors on Tuesday having spent almost three months at the club.

Townsend continued: "We'd like to thank German for coming to Glasgow at a time when a number of our props were injured.

"Though it is great to see Ed Kalman and Jon Welsh now return to fitness, German has been extremely valuable to us on and off the pitch.

"We wish him all the best."