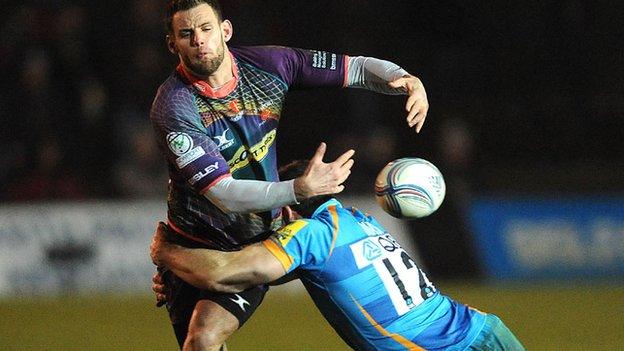 London Wasps survived a late Dragons onslaught to put themselves in the frame for a home draw in the quarter finals of the Amlin Cup.

Wasps had won Pool 3 before this match, but needed a bonus point victory to be sure of a home draw in the quarter finals.

"We knew it was going to be tough. I know better than most how difficult it is down here in Rodney Parade, but we just didn't quite turn up in the first half.

"The Dragons made it difficult for us, particularly in the tackle area, and we couldn't get any flow at all

"The bonus point would have been great, but going in at half time we knew it was going to be a roll-your-sleeves-up kind of battle second half, so we just did enough but there's plenty to work on."

As it turned out they were hanging on for victory as the Dragons threw everything at them in a frantic finish.

Their tally of 25 points means Stade Francais will need a big win in their last game in Pool 5 to rob Wasps of home advantage.

The Dragons' early tactics were to launch high kicks and put pressure on the Wasps back three.

But former Scotland international full back Hugo Southwell was solid under the pressure and Wasps took every opportunity to launch number eight Billy Vunipola at the Dragons' defence.

However, the Dragons' tactics did yield two penalties. Full back Prydie fluffed the first but made no mistake with the second.

Former Wales international fly half Nicky Robinson struck back for Wasps before the Dragons produced a moment of magic to score the opening try.

Hooker Sam Parry forced a turnover on halfway and Jonathan Evans, Adam Hughes and Nic Cudd carried the attack to the Wasps try line before a looping pass and clever flick by Rob Sidoli gave fly half Dan Evans a simple touchdown.

Prydie converted, but Wasps immediately upped the power and pinned the Welsh region back.

Robinson kicked a second penalty and they thought they had scored when Andrea Masi pounced on a charged-down Ben Evans clearance.

But the Dragons drew level on the stroke of half time with another Prydie penalty.

Robinson made a hash of a penalty early in the second half and Wasps lost the powerhouse Vunipola who limped off in the 49th minute.

Prydie edged the Dragons ahead with his third penalty in the 52nd minute, but three minutes later Toby Faletau was sent to the sin bin for failing to roll away after a tackle.

And within two minutes the numerical advantage told when Robinson followed up his own kick to claim a try, which he also converted.

It was Robinson's last involvement as he was replaced by record Wales international cap holder Stephen Jones.

Steffan Jones replaced Prydie and his first action was to kick a penalty from 52 metres to bring the Dragons back to within a point of Wasps.

And it took desperate defence to stop the Dragons as first Ben Evans and then Michael Poole lost possession in promising attacks.