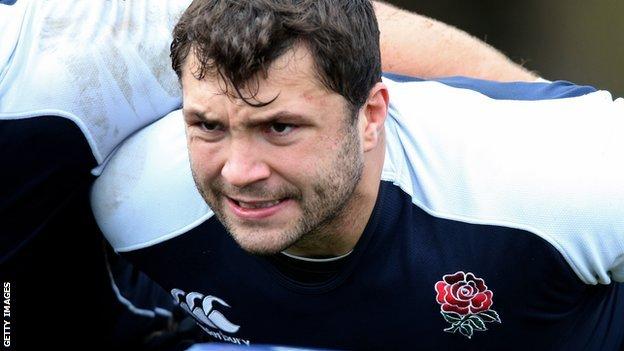 Northampton Saints will sign England loosehead prop Alex Corbisiero from London Irish at the end of the season.

The 24-year-old has made 76 appearances for the Exiles and has 18 England Test caps.

A good prop is worth his weight in gold. Signing Alex Corbisiero goes some way towards filling Northampton's front row void for next season.

But the coaches argue their strength in depth is being severely tested by the salary cap. Therefore, so is their ability to land a big trophy.

It's clear this pressure is having an impact on the coaches, angry with unfair criticism over recent performances.

"Corbisiero is a good, all-round player. I was really impressed with him for England against New Zealand," coach Dorian West told BBC Look East.

"He likes to scrummage and he's good around the pitch.

"He's had a bad knee injury but the feeling is he's going to recover and he's fully expecting to play in the Six Nations and then, hopefully for him, the British and Irish Lions tour."

Corbisiero said: "There is a great culture and hopefully I can help the team succeed whilst continuing my progression as a player."

The United States-born player is a doubt for England's Six Nations opener against Scotland on 2 February with a knee injury. He had been offered a new contract by the Exiles but will instead bolster the Saints' front row next season.

"I've really enjoyed my time at London Irish and am grateful for everything that the club has given me," he said.

Meanwhile, Saints duo Alex Waller and Tom Mercey have both agreed new deals. And Doran-Jones could be about to leave Franklin's Gardens, having joined in 2011-12.

"So it's three good, young props we're signed there and we're looking to add to those."

Waller, 22, is the only Saints player to have featured in every first-team match-day squad since the start of the 2011-12 season. He also won the club's Young Player of the Season award last year.

The Kettering-born senior academy graduate has made 78 appearances.

"It wasn't a hard decision to make," he said.

"My family are in the area, I've been playing here for the last four or five years and I feel that I have developed a lot as a player. Hopefully I've become an established member of the squad and can keep on pushing for a starting spot."

Mercey, 25, who is in his third season at Franklin's Gardens, has made 44 appearances for Saints and has also represented England Saxons.