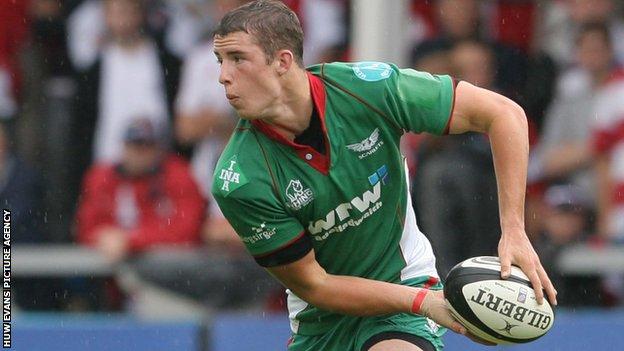 Fly-half Steven Shingler has rejoined the Scarlets from London Irish on a three-year deal - on the same day his brother Aaron agreed a three-year extension to his deal at the region.

He was named in Scotland squad for the 2012 Six Nations after he had played age group rugby for Wales.

The International Rugby Board ruled Shingler was tied to Wales after his Under-20s appearance.

Shingler, who left the Scarlets for London Irish in 2011, claimed he was not aware his appearance for Wales had decided his international future.

He lost his appeal to the IRB in Dublin back in May and will now join the Scarlets at start of next season.

Shingler's elder brother, Aaron, 26, made his debut at openside flanker in Wales' 27-13 win over Scotland in February 2012.

His contract extension will keep him at Parc Y Scarlets until 2016.

Steven Shingler said wanted to "move on" after the eligibility row and that he was returning to his rugby roots.

"I've always remained a supporter and the Scarlets will always be a huge part of my life," he said.

"You never lose that if you've grown up supporting Llanelli as a youngster - it's a strong rugby family and one of most passionate rugby communities around.

"I am very grateful to have this opportunity to come back to Wales and back to what I consider my rugby home; playing for a region I feel so strongly about and that has such devoted supporters."

The question of Steven Shingler's nationality led to him hitting the headlines in 2012 when Scotland selected him on the basis he has a Scottish mother.

Wales objected because he had played for Wales Under-20s, the nation's designated "second team".

An International Rugby Board panel had ruled that Shingler could play only for Wales and not for Scotland, having played for Wales Under-20s against France Under-20s in 2011.

Shingler appealed against the decision and the IRB agreed at a special meeting to rule on the issue of what is a country's second team.

The IRB released a statement that confirmed Shingler had lost his appeal, it read: "Under the regulations committee decision, Shingler was deemed to have been captured by Wales having represented the Wales Under-20s team against the France Under-20s team in a 2011 Six Nations fixture.

"Both Wales and France had individually designated their under-20 teams as their next senior national representative teams."

"There's a lot to come from our group and we know and believe as players we have the potential to achieve much more going forward," he said.