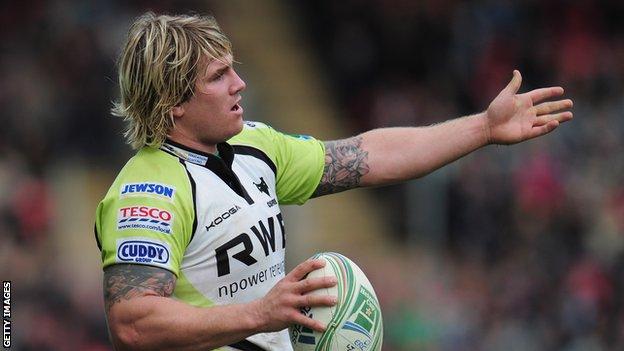 Wales hooker Richard Hibbard has been dubbed the "best hooker in Europe" and tipped to make the British and Irish Lions tour to Australia.

Ospreys coach Jonathan Humphreys insisted Hibbard more than matches any hooker in the rest of the Six Nations.

"I think he is the best hooker in Europe," said Humphreys, a former Wales hooker himself who won 35 caps.

Hibbard hopes to be fit for Wales' Six Nations opener against Ireland on 2 February despite a shoulder injury.

Asked if he would pick Hibbard, who has been selected alongside Scarlets hookers Matthew Rees and Ken Owens in Wales' 35-man Six Nations squad, on the Lions tour, Humphreys said: "If it was up to me to pick it - yes."

As a former Cardiff hooker and ex-Wales captain, Humphreys is well placed to make his judgment of 29-year-old Hibbard.

He has been impressed by Hibbard's commitment to the Ospreys' cause in recent weeks despite carrying a shoulder problem he originally picked up winning his 19th Wales cap against Samoa last November.

"You have got to bear in mind he came back in less than half the time [the medical staff] said.

"We have people out for 10 weeks and he came back in three."

It was only 12 months ago that Scott Johnson, the then Ospreys director of rugby, questioned Hibbard's fitness after he was left out of Wales' squad for the 2012 Six Nations.

But Hibbard has come a long way since then and made Wales' three-Test summer tour of Australia in 2012.

"I'm biased but I spend my life looking at opposition, looking at other hookers' strength and weaknesses," said Humphreys.

"The kid is 112kg, phenomenally aggressive, outstanding at set piece. What more do you want? The kid can change games. He is very important to us [the Ospreys]."

Hibbard played in the 15-15 Heineken Cup draw with Leicester Tigers on Saturday before coming off 21 minutes from time with the shoulder problem.

"I thought he was phenomenal on the weekend," added Humphreys.

"Here is a kid who has got a bad shoulder. We had to manage it all week and the first couple of minutes in the game he is smashing into people.

"With one shoulder he was phenomenal on the weekend and I hope he starts for Wales."