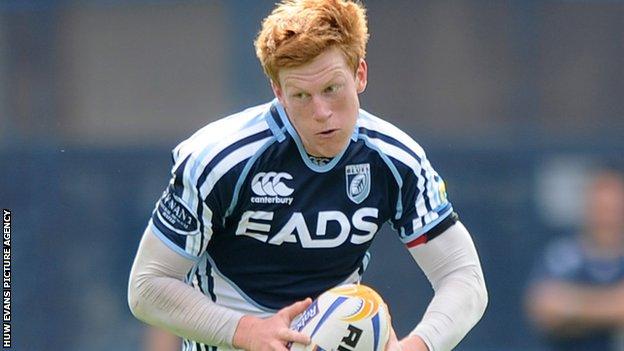 Cardiff Blues fly-half Rhys Patchell has been included in a 27-man Wales Under-20 squad for the Six Nations.

Patchell had been tipped to make the senior squad but interim Wales coach Rob Howley has indicated he wants to monitor the 19-year-old's development.

Wales U20 coach Danny Wilson believes Patchell will benefit from being in the squad.

"When Rhys comes back to this level he will be a senior player - a leader at this level," said Wilson.

"I think it is important for him to come back and lead."

Patchell is one of seven Blues players in the squad, including captain Ellis Jenkins.

Three players - Carmarthen prop Gareth Thomas, Swansea fly-half Sam Davies and Llanelli full-back Jordan Williams - are currently unavailable due to injury, but will return to the squad when fit.

On the make-up of the squad Wilson said: "It's exciting to see a good spread of players with experience from last season and those who are new to this level of rugby.

"As a coaching group, we have undertaken a more thorough process this season and between us have seen a lot of regional and Premiership rugby, both live and on video and have had a good look at all the players in contention.

"We have a strong pool of players to select from. Ieuan Jones and Rhys Patchell are amongst those who have shone at regional level of late, along with Harry Robinson, of course, who is already capped by Wales."

They open their campaign at home to Ireland on Friday, 1 February.

Wales finished fourth in the 2011-12 tournament with two wins from five games as England U20 won the title.