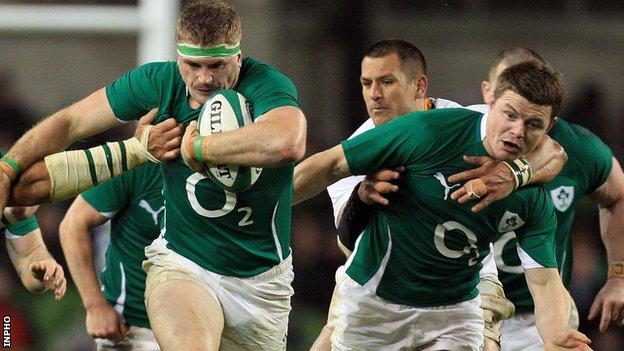 Jamie Heaslip has been retained as Ireland captain for the Six Nations despite the return of Brian O'Driscoll.

Back-row Heaslip gets the nod ahead of 33-year-old O'Driscoll, who said he was "very disappointed" but "accepted the reasons behind the decision".

There are six uncapped players in the 39-man Six Nations training squad.

Ireland coach Declan Kidney explained his decision to hand the captaincy to Heaslip for the Six Nations.

"Jamie had done a really good job for the squad and management during November and I felt that now was the correct time to do this," he said.

"Brian has had very little rugby in the last number of months and I think he deserves the space and time to concentrate on getting himself back playing fully fit.

O'Driscoll, who has scored a record 45 tries in his 120 Tests for Ireland, said he understood the move and will support his Leinster team-mate.

"The captaincy has been a big part of my career and life over the last number of years," added the centre, who first led his country on the occasion of his 31st cap in November 2002 and has had the role on a full-time basis since the start of 2004.

"While I was naturally very disappointed not to be leading the team in the Six Nations, when I talked it through with Declan I accepted the reasons behind the decision.

"I've always known that the Rugby World Cup in 2015 was most likely a bridge too far for me, so at some point a player, who will most likely be there for the tournament, needs to build that captaincy experience.

"Jamie will do a fantastic job and along with the other senior players in the leadership group, I will be giving him all of the support that he needs."

O'Driscoll led Ireland on a record 83 occasions, more than twice as many times as anyone else, after first skippering the Irish in 2002 and he also captained the Lions in one Test in New Zealand in 2005.

Kidney insisted that his decision to take the captaincy away from O'Driscoll would not affect the 33-year-old's chances of leading the Lions in Australia this summer.

Heaslip, 29, has won 52 Irish caps since making his debut against the Pacific Islanders in 2006.

He said: "I was incredibly honoured when Declan asked me back in November to lead the team in Brian's absence. To lead your country is the ultimate in any sport.

"To get the opportunity again, considering what an inspirational leader Brian is and the other players who could have been chosen to captain the team, is even more humbling.

"I know Brian as a team-mate and as a friend and I will be relying on his and the other players' support as we head into the championship."

Notable absentees from the squad are Ulster flanker Stephen Ferris, who is recovering from ankle surgery in early December, wing Tommy Bowe, sidelined until April after a knee operation, and Paul O'Connell, who underwent a back injury last month.

Kidney said that Ferris has "an outside chance but only that" of playing a part in the latter part of the Six Nations but that Bowe and O'Connell will both miss all of the competition.

"Stevie has shown in the past three he's been able to bounce back from injuries once he gets up and running."

There will be additions to the squad, primarily in the back row, after this weekend's round of Heineken Cup games.

Ireland have also announced that that Munster assistant coach Anthony Foley and Leinster's Greg Feek will be part of that coaching team for the Wolfhounds game against England Saxons on 25 January in Galway.

Foley and Feek will continue to work with the Ireland squad throughout the Six Nations.