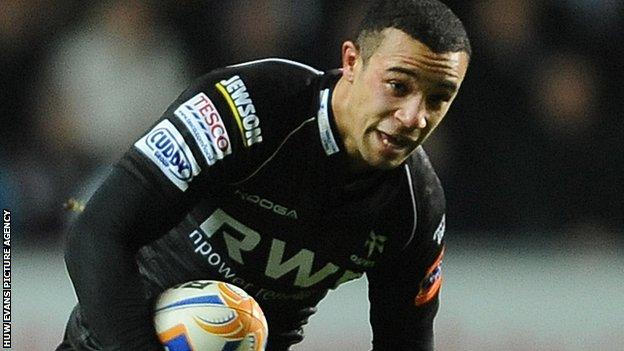 Walker is one of five uncapped players in Wales' Six Nations squad, having been selected alongside Scarlet George North and Cardiff Blue Alex Cuthbert.

I'd like to think I have learned a thing or two. He is any winger's hero in Wales and in world rugby

The 20-year-old is in his first full season at the Ospreys and admits Williams is a hero.

"He's an outstanding player and a great friend as well. He's definitely someone to look up to," said Walker.

"I'd like to think I have learned a thing or two. He is any winger's hero in Wales and in world rugby.

"I was fortunate to have a few years training with him coming through the academy and then stepping up to the senior squad."

Williams, who was capped by Wales 87 times and played four Tests for the British and Irish Lions, retired from Welsh rugby in 2012 and is now playing in Japan for Mitsubishi Dynaboars in Division Two of the Japanese League.

He sent a tweet to Walker, which said: "Congrats on selection pal. When you put that red shirt on make sure you play with same confidence and you'll tear it up!".

Walker, who said he also received advice from Ireland wing Tommy Bowe, has scored five tries in 13 appearances for Ospreys this season.

He caught the eye in particular with a superb solo effort in a 17-6 Heineken Cup win over Toulouse in December.

There was further evidence of his potential on Sunday when his weaving run set up a late try as Ospreys clawed their way back to draw 15-15 with Leicester.

With Wales wanting to move North to the centre, interim coach Rob Howley revealed Walker could soon be given his chance in the Six Nations.

"I think he's pretty special. In most sports there's no substitute for out-and-out pace and that's one thing that kid's got.

"He's got to be one of the fastest I've ever seen on the field. The kid is electric - it's nought to flat out in a second.

"But I think Eli's biggest trait is his character, he's a wonderfully brave kid, a great competitor and he's a good bloke as well.

"You put all that together and all of a sudden you've got the makings of a great player."

"The number of line breaks and tries he's scored, and his ability to beat players is exceptional.

"To have Eli in putting pressure on George North and Alex Cuthbert, that's a key ingredient for us in terms of competition for places."

But Walker admitted his ambitions for this season were rather more modest than a Wales squad call-up.

"My goals at the beginning of the year were just to come back fit after this shoulder injury I had in the pre-season and get the starting jersey for the Ospreys," he told BBC Sport Wales.

"Confidence is growing with each game. [I'm] still learning and just enjoying my rugby.

"Ever since I picked up a ball it was a goal as a kid. It's a dream of any Welsh rugby player."