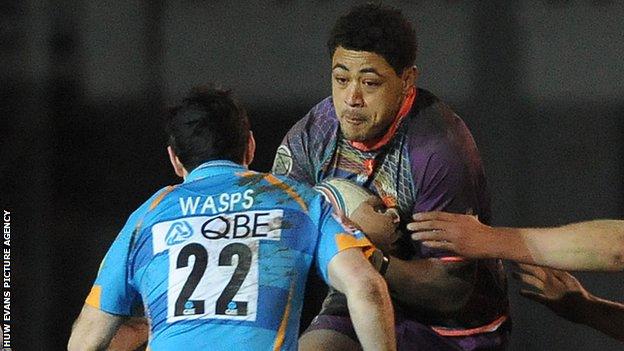 Newport Gwent Dragons coach Darren Edwards believes his team are close to claiming a major scalp after another near miss in the Amlin Cup.

Their 20-19 defeat to London Wasps came a week after a late try by Mike Phillips robbed them of victory in Bayonne.

It left the Welsh region with two wins against Italian side Mogliano to show for their efforts in the tournament.

"We'll keep battling hard and I believe we will get there," said Edwards.

For the second week running it was a Welshman who proved their undoing.

But the English club were hanging on at the end. The Dragons paid a high price for losing possession at crucial times, as well as Tom Prydie's three missed penalties.

Robinson's try came when the home team were down to 14 men after Toby Faletau had been sent to the sin-bin for failing to roll away at a tackle.

"We've just got to get over this hurdle.

"There's enough points out there to get the win and we're just not taking them," said Edwards.

"We played a very good team that's in good form in the English Premiership, so when you're getting close to those sort of teams you've just got to keep on driving hard.

"You can only question your team when they lack attitude.

"But when they show the attitude they did out there, then all we can do is work on the technical areas."