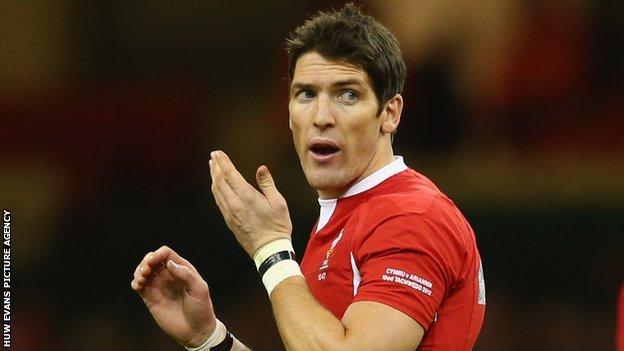 Fly-half James Hook has given Wales a further boost ahead of the Six Nations by returning for Perpignan following a chest injury.

Hook, 27 and with 67 caps, came on as the French club beat Rovigo 40-22 in the Amlin Challenge Cup on Thursday.

Hook and Osprey Dan Biggar have been named as the Wales squad fly-halves.

Scarlet Rhys Priestland (Achilles) is out for the season while Cardiff Blue Rhys Patchell has been included in the Wales Under 20 Six Nations squad.

That leaves Hook and Biggar to battle for the number 10 jersey.

When the pair both played for the Ospreys, Biggar took the Wales fly-half position leading to Hook switching between centre, full-back and stand-off.

But since his move to France ahead for the 2011-12 Top 14 campaign, Hook has been Perpignan's first-choice pivot giving the player the chance to establish his credentials in the number 10 position.

In the wake of the squad announcement, the would be fit to start the tournament against Ireland in Cardiff on 2 February.

Back-five forward Jones (thumb) and hooker Hibbard (shoulder) went off in Ospreys' 15-15 Heineken Cup draw with Leicester, while Evans (knee) has been out since Wales' November' loss to Samoa.