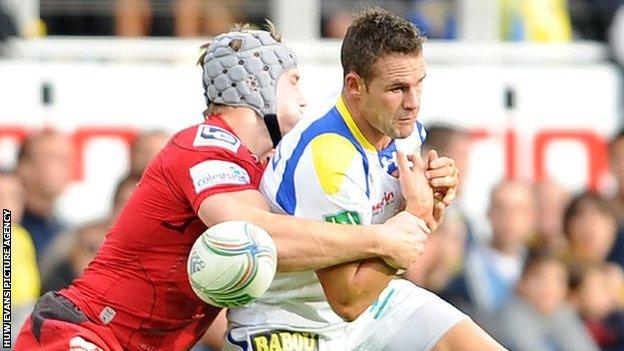 Lee Byrne is relishing the competition with Leigh Halfpenny and Liam Williams for the Wales full-back berth during the Six Nations.

Clermont Auvergne's Byrne has been included in a 35-man Welsh squad after being overlooked for the autumn internationals.

The 32-year-old will be up against Cardiff Blues' Halfpenny and Scarlets' Williams for the number 15 shirt.

"It's going to be a good battle and I'm looking forward to it," Byrne said.

Halfpenny was Wales' star performer during an autumn series in which they lost all four Test matches.

And Williams, who Byrne faced in Clermont's 29-0 Heineken Cup win over the Scarlets, can play full-back or on the wing.

"Leigh Halfpenny played superb in the defeats and you can't take that away from him. He stood out and is obviously a goal kicker as well," Byrne added.

"He's got a lot of plusses to his game.

"Liam as you've seen is not scared to do the dirty work and he'll get stuck in.

"It's obviously great to get a recall. I'm fortunate that I play for a superb team, in a superb competition and with superb coaching staff.

"I've been given a chance and got on with it so it's nice to get a recall. I haven't been there for a season or so. I'm looking forward to get back."

The 46-times capped Welshman left the Ospreys to join Clermont Auvergne on a three-year deal during the summer of 2011.

He toured with the British Lions to South Africa in 2009, fell out of favour with Wales during the 2011 World Cup.

Byrne has recently been out of action after suffering a cracked bone in his back but played for the French side in their win over the Scarlets.

Clermont are through to the last eight of the Heineken Cup with a 100% record in the pool stages and are currently second in France's Top 14.

"We've certainly improved from last year and we've gone up another notch again," Byrne said after his side's win at Parc y Scarlets.

"We want to go one step further in both competitions. Let's not get ahead of ourselves - we've got some work to do."