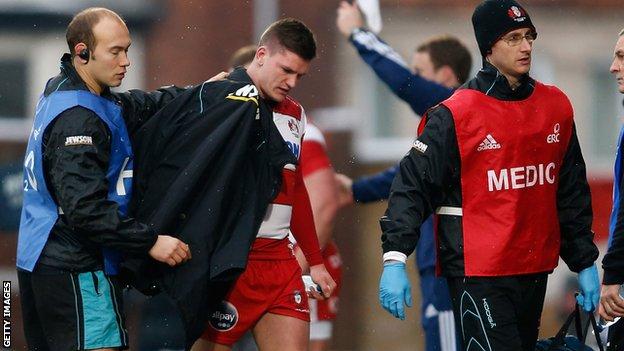 Burns, 22, lasted just 12 minutes before limping off after being hurt in the build-up to his side's first try.

"He's tweaked his medial ligament in his knee and we'll have to wait and see how bad it is," Gloucester director of rugby Nigel Davies said.

England's opening Six Nations match against Scotland is on 2 February.

Burns and was named in earlier this month.

"We'll get a better feeling for it over the next 48 hours once some of the swelling goes down and we get it scanned, but it is a little bit unfortunate for Freddie," Davies told BBC Radio Gloucestershire.

Burns indicated his concern about the injury on Twitter, posting: "Thanks for all the messages. Pretty gutted right now but got to see what the next 24/48hrs holds. Fingers crossed."