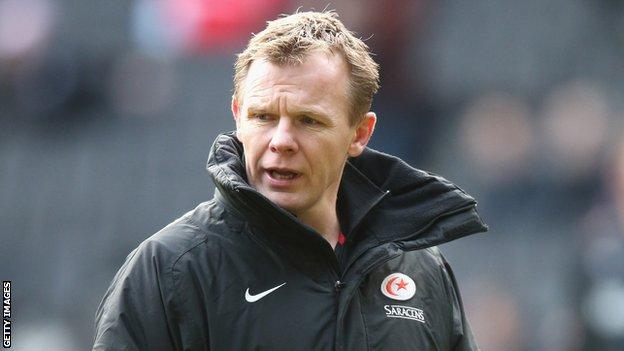 Ulster will face Saracens away in the quarter-finals of the Heineken Cup after the English club beat Edinburgh in the Pool 1 clash on Sunday.

The English club's five-try 40-7 win at Vicarage Road earned a bonus-point win and moved Mark McCall's side above Ulster in the qualification standings.

Saracens and Ulster were level on Pool points but the English club's greater try count earned them the home draw.

The winner will be at home to Toulon or Leicester at the semi-final stage.

Saracens and Ulster will meet on the weekend of 5 to 7 April.

The game will see Saracens coach Mark McCall taking charge of his team against his former club at Vicarage Road.

McCall was a part of the Ulster squad during the European Cup winning triumph in 1999 and was head coach of the Irish province between 2004 and November 2007.

While Ulster are in the last eight, holders Leinster have been knocked out of the competition after their Irish rivals Munster earned a 29-6 bonus-point win over Racing Metro.

Munster's win earned them an away trip to Harlequins in the last eight, with the winners of that tie travelling to take on Clermont Auvergne or Montpellier in the last four.

Heineken Cup holders Leinster have to be content with a quarter-final spot in the Amlin Cup where they will be away to Wasps.

Ulster coach Mark Anscombe was philosophical about his side missing out on a home quarter-final.

"The eight teams in the quarter-finals are all high quality sides, so there was never going to be such thing as a favourable draw," said the New Zealander.

" It's disappointing not to be at home - we dropped our guard by not beating Northampton at Ravenhill and that has cost us.

"Hopefully we will get our injured players back for the quarter-final.

"It is two and a half months away, so a lot is going to happen between now and then. With the way the semi-final draw has worked out there is a massive incentive there."