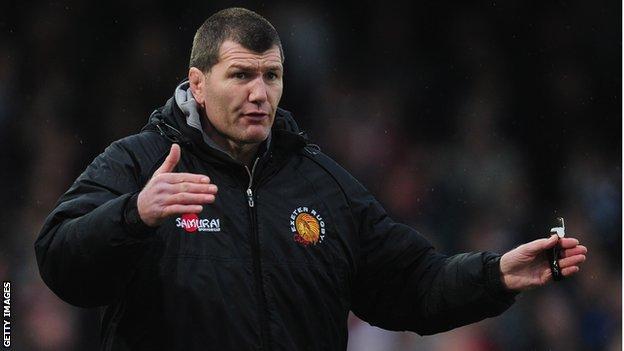 Exeter head coach Rob Baxter says he is "desperate" for his side to return to the Heineken Cup next season.

The Chiefs' involvement in this year's tournament ended following their on Saturday.

"We're desperate for it," Baxter told BBC Radio Devon. "But it's like anything, the Premiership's our bread and butter.

"If we do well in the Premiership and perform to the levels we can, then we should be able to get there again."

Exeter, who played in the tournament for the first time, impressed with as well as

They currently lie seventh in the table, four points off the sixth and the final league place that could guarantee a place in European rugby's premier competition.

"We want to be top six and we've got some games that we feel are within our grasp," Baxter said.

"We've used the intensity of the Heineken Cup to help make us a better team and that's what we have to take into the Premiership.

"You have to get your intensity levels right first and then bring the quality of your performance up while you're performing at that intensity.

"That's what we have to learn to do to make us a better Premiership side and a better Heineken Cup side."