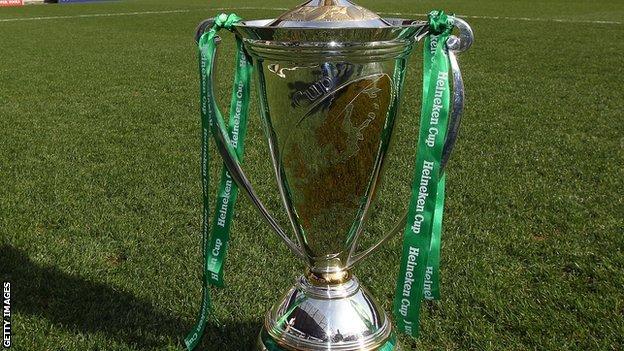 Ulster's Heineken Cup quarter-final against Saracens will be played on Saturday, 6 April (18:30 BST), although the venue has yet to be finalised.

Saracens are exploring the possibility of staging the game on the club's new artificial pitch at Allianz Park.

Munster's quarter-final against Harlequins will take place at Twickenham Stoop on Sunday, 7 April.

As in the case with Ulster's clash with Saracens, the announcement of the venue for Toulon's clash with Leicester has been delayed.

Allianz Park is Saracens's preferred choice for the quarter-final, with Wembley or Twickenham potential alternatives.

But, if held at Allianz Park it would become the first European game to be played on an artificial surface.

Sunday's test event against Cardiff in the LV= Cup will be the first game played on the artificial pitch in front of a crowd of 3,500, three weeks before the official opening against Exeter in the Premiership on 16 February.