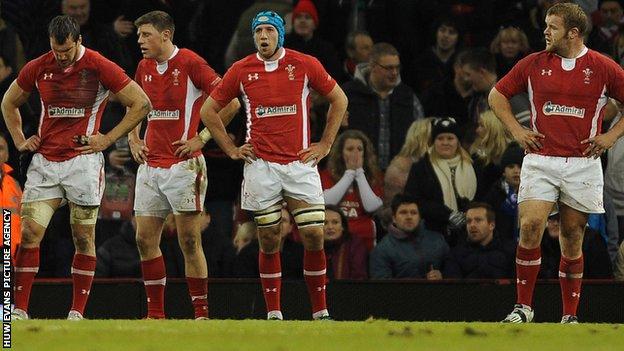 Wales will use the "hurt and pain" of their recent run of defeats to defend their Six Nations crown.

Wales won the Grand Slam in 2012 but have lost their last seven Test matches.

Rob Howley, the interim Wales coach, has told his players the losing streak must end against Ireland on 2 February.

"Rob has made it very clear that we are on the back of a run - in terms of losing results," said Wales forwards coach Robin McBryde.

"It is now seven [games] without a win and you cannot be happy with it."

Wales are in the middle of their worst sequence of results since the 10 defeats in a row from November 2002 to August 2003.

They suffered a 3-0 Test series defeat to Australia on their summer tour and lost all four autumn Tests in November.

The reigning Six Nations champions suffered shock defeats to Samoa and Argentina and were beaten by New Zealand and Australia at the Millennium Stadium.

Defeat to the Wallabies meant Wales dropped out of the top eight in the world rankings for the 2015 World Cup and were drawn in the same pool as England and Australia as third seeds.

Wales captain Sam Warburton described the 12-14 defeat to Australia after Kurtley Beale's last-minute try as the "worst of his career."

After sweeping all before them in the 2012 Six Nations, Wales are determined to end their seven-match losing streak.

"We have to make sure every member of the team, whether they are new or old, coming into the squad feel that pain and that hurt as much as we do as coaches," said McBryde.

"The desire to put that right has to be at the forefront of their minds really."

Wales have won their last three games against Ireland, including a 2011 World Cup quarter-final, and beat Ireland 23-21 in Dublin last season.

"We are not looking any further than the Irish game," said McBryde.

"It is a big start for us and it will be a big test for us.

"We have to take the hurt and the pain we have felt in the summer losses to Australia, as close as they were, and in the Autumn.

"We have to come out fighting and make sure we are better than that."

Wales will be without a host of key players including fly-half Rhys Priestland, locks Luke Charteris and Bradley Davies and prop Aaron Jarvis, who have all been ruled out of the tournament with injury.

Lock Alun Wyn Jones, centre Ashley Beck, flanker Dan Lydiate and hooker Huw Bennett will miss the start of the campaign but could be available at some point during the Six Nations.

Yet Wales could be boosted by the return to fitness of flanker Ryan Jones (finger), hooker Richard Hibbard (shoulder) and lock Ian Evans (knee) for the visit of Ireland.