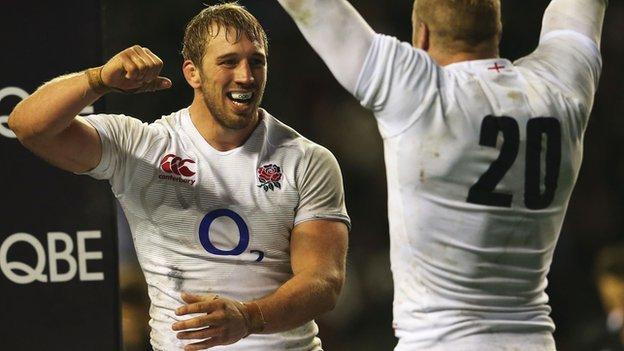 Harlequins flanker Chris Robshaw has been reappointed England captain for the Six Nations, which starts next month.

"Chris stepped into the role 12 months ago and has grown as a leader on and off the field," said England boss Stuart Lancaster.

Our focus is on building on the New Zealand performance

Robshaw added: "There are other leaders in the squad that Stuart could have turned to so I am really honoured."

England's campaign begins on 2 February against Scotland at Twickenham.

England's best display under Robshaw's captaincy was the 38-21 win over world champions New Zealand in December.

"He showed those leadership qualities during the QBE Internationals, and especially against the All Blacks when the whole squad got behind him," said Lancaster.

"We have a number of leaders and I know they will all take this team forwards with Chris as we look to kick on from that result."

Robshaw, 26, was first handed the captaincy ahead of last year's Six Nations.

He made his England debut in 2009, but missed out on the 2011 World Cup squad during Martin Johnson's troubled time in charge.

The flanker's reign as captain has not been without criticism - he came under fire for his decision to go for goal when England were trailing South Africa 16-12 with just over a minute remaining in November.

But the win over the All Blacks changed the mood around the camp and Robshaw is keen to maintain the momentum in the Six Nations, in which they finished second last year.

"The lads have been great over the last year and now our focus is on building on the New Zealand performance and getting a result against Scotland," said the captain.

Meanwhile, 22-year-old Gloucester fly-half Freddie Burns, who damaged his left knee at the weekend, will stay with England at their Leeds training camp while the full extent of the problem is established.