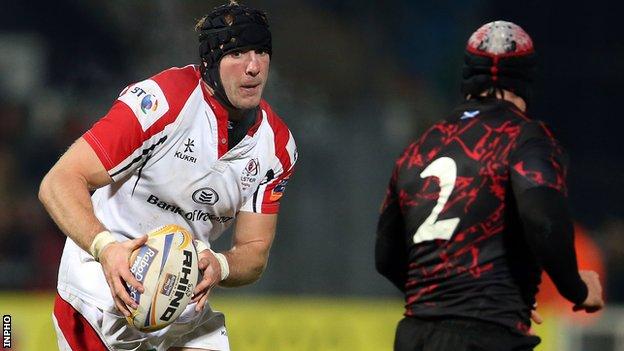 Ulster coach Mark Anscombe is hopeful that Stephen Ferris could be back in action by the middle of February.

The Ireland flanker has been ruled out since sustaining an ankle injury in November and he underwent surgery in early December.

Anscombe's comments appear to boost the possibility that Ferris could play a role in Ireland's Six Nations campaign.

However, the Lions star will probably need to prove his fitness for Ulster before being rushed back into the Ireland squad.

Ulster are not in action again until the 9 February Pro12 contest at home to the Ospreys before facing Zebre, Glasgow and Treviso over the following three weekends.

Ireland's Six Nations campaign starts with an away game in Wales on 2 February before the home match against England on 10 February.

A two-week Six Nations break follows before Ireland's away contest against Scotland on 24 February and they conclude their campaign with matches against France on 9 March and Italy seven days later.

Ferris missed all of Ireland's autumn internationals because of his injury.

The flanker's Ulster team-mate Tommy Bowe has been ruled out of the Six Nations because of knee surgery and Anscombe is cautioning against any suggestion that the winger could be fit for the Heineken Cup quarter-final against Saracens in early April.

"That would be pushing it," said the Ulster coach.

"We've got to be very careful with such a serious injury that he had. We don't want to be rushing it. We've got to look at the longer-term effects of where it's at."

However, Anscombe is optimistic that Johann Muller, Dan Tuohy and Luke Marshall will be in contention to return to action against the Ospreys on 9 February.

Muller suffered a broken arm in early December while Marshall (broken finger) and Tuohy (calf) have been out in recent weeks because of injury.

"Johann will be ready for the Ospreys in a couple of weeks when we come back from the break," added Anscombe.

"Tuohy hopefully (will be back) around them and Luke Marshall the same."