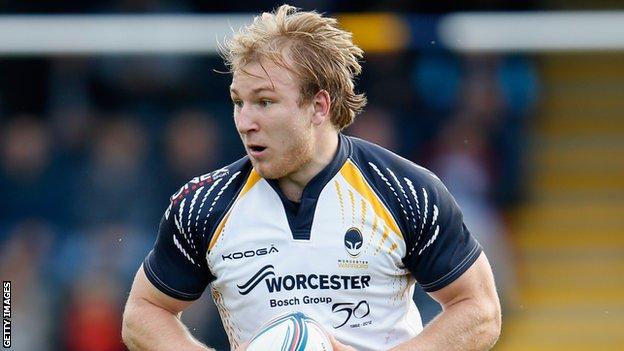 If Kvesic wins his first England cap, he would be the first Worcester player to do so since Matt Mullan in 2010.

"It was a bit of a shock to get a call - I can honestly say I had no idea," Kvesic told BBC Hereford & Worcester.

"I was packing my bags on Sunday morning, getting ready to meet up with the England Saxons and got a call from Stuart [Lancaster - England coach] saying they wanted to bring me in."

The German-born player added: "It [his phone] was on silent in my pocket so I didn't pick it up the first time and I heard the voicemail.

"I did think someone was having me on so I called the number back and Stuart explained where I was at and we went from there."

Kvesic made his Warriors debut in 2011 and has since gone on to make 54 appearances for Richard Hill's side.

He is capped for England at Under-20 international level, and is determined to work hard to try and get into Lancaster's squad when they begin their campaign against Scotland on 2 February at Twickenham.

"My next step is just that I want to push on and try and get a cap in the Six Nations," he said.

"I've got a lot of hard work to do and I just need to get my head down and hopefully impress.

"It's a valuable experience training with the best players in England and I can learn a lot from those guys. It's just an exciting time to be involved."