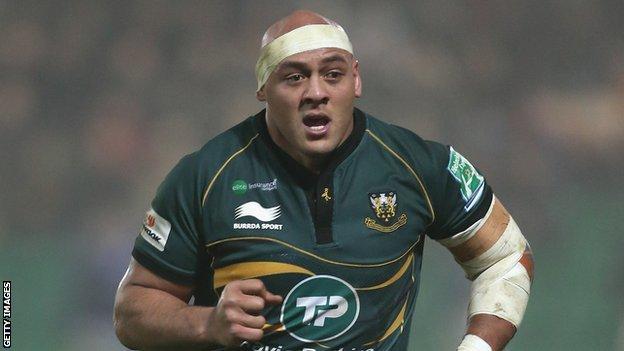 Northampton Saints prop Soane Tonga'uiha has said a lack of variety to their play may have cost his side a Heineken Cup quarter-final place.

"I think teams are aware of where our strengths are," Tonga'uiha told BBC Radio Northampton.

"They're working us out and we need to change our game plan a bit and look to improve the variety in our play."

In the 2010-11 campaign, Northampton were beaten finalists in the competition, losing to Leinster.

Two years later, however, and they have failed to reach the last eight and have also not done enough to qualify for the Amlin Challenge Cup.

For Tonga'uiha, the Glasgow defeat was his 200th competitive match for the Franklin's Gardens side, but could well be his last in Europe for the club, as

"It's a memorable 200th game for the wrong reasons," said the 31-year-old Tongan.

"I'm a bit disappointed to be honest. Especially considering where we were two years ago - in a Heineken Cup final.

"To not get through the pool stage [over] the last two years is a bit disappointing but you can't dwell on it too much."