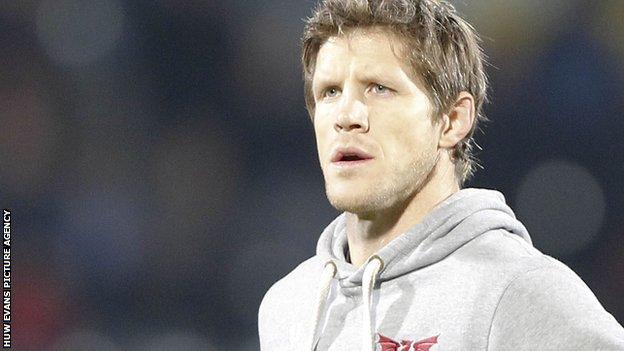 Head coach Simon Easterby has said he is keen to bring in more players to strengthen his Llanelli Scarlets squad.

The Welsh side have re-signed fly-half Steven Shingler and Easterby says he wants to add more players in the summer.

"There's a couple of areas we'd like to recruit in," Easterby said.

"It's definitely something we have to look at. Like anything it will come down to the resources available to us."

The former Ireland international added: "I know the board and the business is working hard to try to provide as much resources as possible for us to do that.

"Hopefully that will come and we will be able to strengthen the squad, which I think we've already done with the signing of Steve Shingler.

"We need to be able to try to do that in other areas as well."

The Scarlets have won only one of their last eight games in all competitions, but they have played three of the best sides in Europe in their last three games.

They have lost to Leinster, who are last season's Heineken Cup champions, Ulster, who are the current Pro12 leaders, and French side Clermont Auvergne, who are one of the two unbeaten teams in Europe this season.

The Scarlets set the early pace in the Pro12 but have fallen outside of the top four play-off places and are fifth in the table behind the Ospreys.

They failed to win a game in their Heineken Cup Pool for only second time in their history in Europe.

Easterby concedes players will leave the Scarlets at the end of the season, but did not comment on hooker Matthew Rees' future.

The former Wales captain's current contract expires once the season ends and the 32-year-old has been linked with a move away from Parc y Scarlets.

"Inevitably there will be players who are out of contract that will be leaving and there will hopefully be players that we will be able to bring in," Easterby added.

"Until things are confirmed and signed off we won't be able to release any comings or goings, other than the ones we've already done.

"We'll have more clarity on that in the next couple of weeks in terms of those that could come in and those that might be leaving."

Easterby is delighted the versatile Shingler has rejoined the Scarlets from London Irish on a three-year contract.

Shingler's signing was announced on the same day his brother Aaron agreed a new three-year deal.

"It shows the supporters that we are trying to be pro-active and move forward," Easterby said.

"Steve coming in will give us options across the back line because he can probably play in three or four different positions and he will also add huge value to the goal-kicking as well.

"Steve has been here before so he knows what this place is all about and that was a big thing in him coming back.

"Aaron's come forward and stepped up in the last couple of years and moved away from the second-row position to focus more on the back-row."