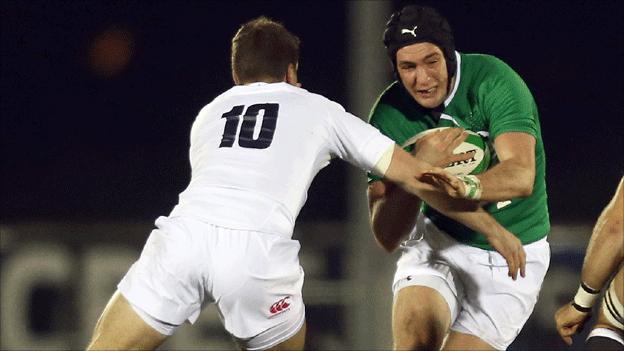 England Saxons recovered from a 10-0 half-time deficit to beat Ireland Wolfhounds at the Sportsground in Galway on Friday night.

Leinster flanker Kevin McLaughlin scored the only try of the first half, with fly-half Paddy Jackson converting and adding two penalties.

Two George Ford penalties brought the Saxons to within four points and then Will Fraser dived over in the corner.

Ford missed the conversion but made amends by landing a late penalty.

Jackson was off target with an early penalty attempt, before flanker McLaughlin stretched to ground the ball onto the line for a ninth-minute try.

Jackson added the additional points and kicked a penalty before the break as England failed to register a score despite their dominance in the scrum.

The Saxons bossed the second period and penalties by Ford in the 50th and 62nd minutes saw them begin their revival.

Wolfhounds replacement Iain Henderson crossed the line soon after entering the fray, but the referee adjudged that his touchdown had included a double movement.

A well executed try from flanker Fraser after 66 minutes nudged the Saxons ahead, and Ford's penalty secured a four-point winning margin for his side.