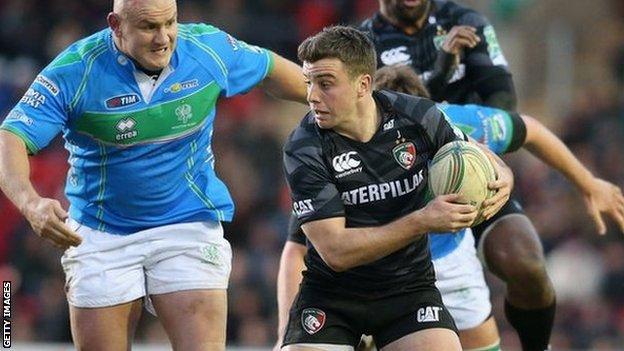 Head coach Gary Gold has insisted Bath have not entered talks with Leicester Tigers' fly-half George Ford but says he is a player they admire.

The 19-year-old, whose father Mike is assistant coach at the Rec, has been linked with a move away from the Tigers when his contract ends in the summer.

Ford's youth deal means he cannot be approached by other clubs until March.

"If George became available he's a type of player we would have a look at," Gold told BBC Radio Bristol.

"Of course we know who he is and I do rate him.

"But unfortunately he falls under the England Under-20 remit and nobody is allowed to speak to him - not us, not anybody - and it's irrelevant that his father is here."

England U20s international Ford has been with the Tigers since the age of 15 and made his first-team debut in November 2009.

Ford started 11 games for Leicester last season, and has made a total of 13 appearances this term. But he remains second-choice fly-half behind England's Toby Flood, who is contracted until 2014.

And although Gold is aware of Ford's calibre, the South African says he is not looking for a new fly-half at present.

"I have to stress that we have Tom Heathcote and Stephen Donald and they are both contracted for next year," added Gold.

"It's not really a position that I'm looking to replace."