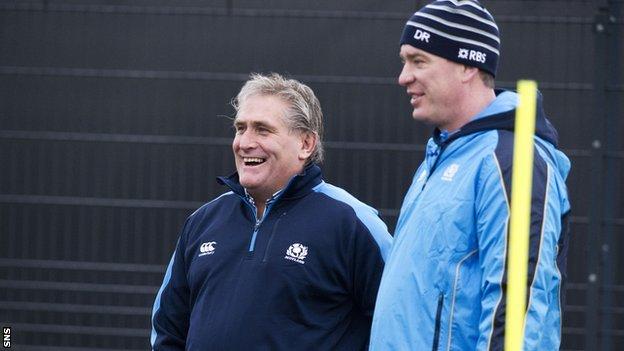 Interim head coach Scott Johnson believes Scotland can be successful if they focus on the job at hand, rather than the end result.

Johnson takes charge of his first match in the Six Nations opener against England at Twickenham on 2 February.

"I can't get the ending unless I get the start and the ride right," he told BBC Scotland.

"The key to this Scotland team is not to get caught up in a scoreboard. The wins will come."

Going forward, if I'm coaching Scotland, I've got to understand the Scottish way

Johnson acknowledges all players want wins, or as he puts it "Ws", after their team name but insists the most important part of his job is making sure Scotland are "there or thereabouts often enough in games".

And he is determined to focus on the positive aspects of Scottish rugby, rather than the negatives.

"If we get our part right, those Ws will come but if we start focusing on the Ws as an ending, we won't get there," he said.

"Everyone harps on about what's bad about Scottish rugby. I'd rather work on what's good. That's me, I'm a half-full guy.

"We've got some issues, we know what some of the issues are and one of them is player base, but we've got some good players too and that player base only rears its head if you have a massive injury toll.

The 50-year-old Australian still feels he is coming to terms with establishing Scotland's traditions in and beyond rugby and has played down suggestions he is not under pressure having taken over following a poor run of results.

"The pressure's on you everyday no matter what job you do, to turn up and do it to the best of your ability," he added. "That pressure is enough.

"Society and cultural differences are important because it's a people's game. I've lived in celtic countries and they are different and it's my responsibility to attach and to understand some of the celtic traditions in the north.

"I may not achieve that challenge in six-ten weeks but, going forward, if I'm coaching Scotland, I've got to understand the Scottish way."

"Scotland haven't won down there for 30 years and England are off the back of a very good win against the world champions," said the Saracens flanker.

"As a squad we're aware of the magnitude of the challenge - but we're also aware it's a challenge we can meet head on."