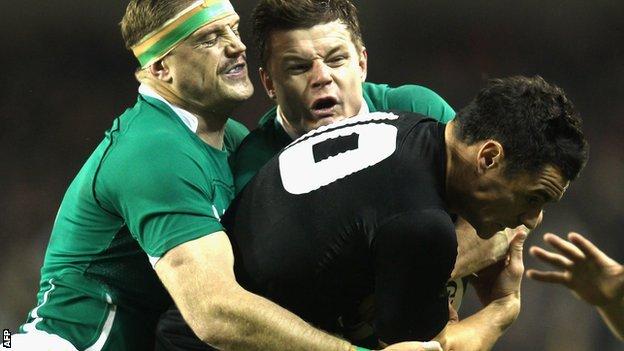 New Ireland skipper Jamie Heaslip has praised predecessor Brian O'Driscoll for his reaction to losing the captaincy after nine years.

The Leinster number eight was retained for the Six Nations after standing in for O'Driscoll during the autumn.

"He came straight up to me, we shook hands and he said he was 100% behind me and if I needed any help, to just ask," Heaslip said.

I nearly had to stop myself jumping across the table to kiss him. That would have made things really awkward, with just the two of us in the room!"

"It's fantastic I can call on a player with that experience."

O'Driscoll, who turned 34 on Monday, has led Ireland in 83 of his 120 Tests, a world record he shares with former Springboks captain John Smit.

Including the Test when he led the British and Irish Lions - albeit briefly - against New Zealand in 2005, no-one has captained an international team on more occasions.

But Heaslip insists O'Driscoll's 'demotion' - he first led Ireland in 2002, and on a permanent basis since 2004 - to the ranks will not affect their relationship or the great centre's influence.

"The dynamics between us won't change," said Heaslip, who has won 52 caps since his debut in 2006.

"I have been captain of Leinster when he has been on the field, and the other way round. Brian is the same individual, the same professional, no matter whether he is captain or not. He deserves all the accolades and respect that he has.

"They are pretty big shoes to fill and hopefully I will do an alright job. I thought it went OK in November, I learnt a lot very quickly and hopefully I can grow into the role in the Six Nations."

Kidney is also pleased - but unsurprised - at the response of O'Driscoll, for whom this will be a 13th Six Nations campaign (having missed last year's through injury) and probably his last.

"I gave Brian a bit of space that he probably didn't want," said the head coach. "But he reacted like the man he is, in exactly the same way as he plays.

"He has had another 80 minutes under his belt now in a good, tough Heineken Cup game (against Exeter last Saturday) and he is buzzing in training, pushing things on in the same way as he has always done."

Ireland open their campaign against defending champions Wales in Cardiff, in the first match of the tournament a week on Saturday, 2 February.

Despite the seven consecutive defeats Wales have suffered since winning the Grand Slam, Heaslip gave short shrift to the suggestion this might be a good time to face the champions.

"I don't think there is ever a good time to play Wales," added the 29-year-old, recalling Ireland's defeats in their last three meetings: two years ago in Cardiff when a controversial Mike Phillips try cost Ireland, a quarter-final defeat at the 2011 World Cup, and a last-minute, 21-23 loss in Dublin 12 months ago.

"They are a tough side, and I don't think their results in November reflects the form of the team. One or two scores in those games and it would have been a completely different outcome.

"We are quite aware of the challenge that awaits us at the Millennium Stadium. The Welsh fans are quite vocal and have a good set of lungs on them.

"It is going to be loud, so we have been very focused on what we need to do to get everyone singing from the same hymn sheet, in attack and defence. Sometime you might only get a second to hear the call before the noise takes over again."