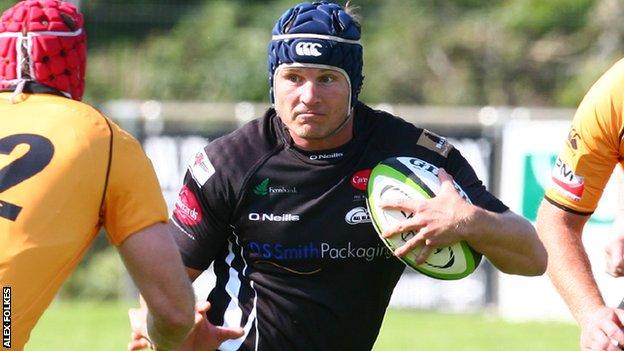 Launceston captain Tom Rawlings has described his side's 19-15 win over second-placed Henley in National Two South as "one hell of a performance".

Josh Lord scored the only try as at the Cornish All Blacks moved up to sixth.

"It was one hell of a performance and I'm really proud of the guys," Rawlings told BBC Radio Cornwall.

"We're playing some great rugby at the moment, it was a phenomenal game today and I'm really over the moon for the boys," Rawlings added.

But two Kieron Lewitt penalties either side of half time reduced the arrears before he kicked a third after an hour.

Lord crossed over with 12 minutes left and Lewitt's conversion put the home side ahead for the first time before he got his fourth penalty with eight minutes to go.

"I was very pleased with the performance as a whole," Rawlings said.

"[In the] first half you could have asked questions about the defence, but if you look at the whole game there were some big hits that went in."

It was the club's eighth win in nine games, but Rawlings says they must continue their good form away at relegation-threatened Southend next week.

"It's all very well doing it against the big dogs, but can we go away from home and do it up at a place like Southend which is a tough place?

"We've turned over a team in the promotion run and if we keep doing this we'll keep climbing the table."