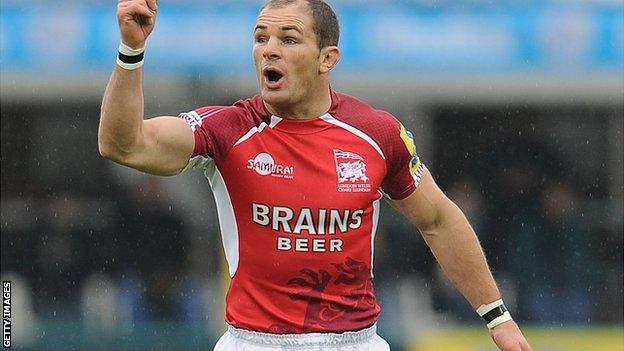 Fly-half Gordon Ross says Saturday's game against Harlequins in LV= Cup will be a "proud" moment as he makes his 100th appearance for London Welsh.

The 34-year-old will lead Welsh out but says Saturday is about the side and not him, despite the milestone.

"The press guy Damian told me in the week that it would be my 100th appearance and I couldn't really believe it," he said.

100 appearances for any club is a huge achievement and honour, and Gordon fully deserves this accolade with London Welsh

The former Scotland international added: "But obviously I don't think anyone is going to care about that on Saturday.

"Saturday is about performing well, improving and being competitive for 80 minutes."

Speaking to Premiership rugby's official website the former Edinburgh, Leeds, Castres and Saracens number ten added that he has no plans to retire.

"I've got no plans to retire just yet, my body has been holding up well and I take the odd week off to recover and that helps, the club have been great in that respect," he said.

And his coach Lyn Jones paid tribute to Ross, who joined Welsh in 2009 and has so far amassed 525 points for the club, including scoring two tries.

"100 appearances for any club is a huge achievement and honour, and Gordon fully deserves this accolade with London Welsh," said head coach Jones.

"He's been a model professional and looked after himself and his game, and in turn he's looked after London Welsh for the last few years."